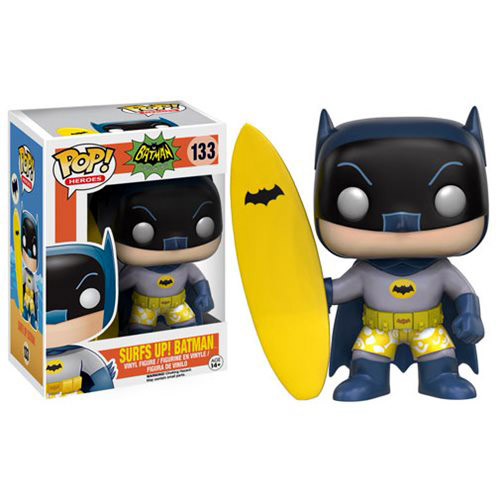 The Dark Knight is ready to hang ten with the Batman Classic 1966 TV Series Surf’s Up Batman Pop! Vinyl Figure.

Remember that time the Joker decided to take control of Gotham City by becoming a surfing champion? Yeah, that was a real thing. The Clown Prince of Crime might not have had the best criminal master plan at the time but the adventure did give us the image of Batman wearing bright yellow swim trunks, and for that, the Joker will forever be a hero in my book.

The figure stands approximately 3 3/4-inches tall and is ready to catch a wave with his yellow Bat surfboard.

The Batman Classic 1966 TV Series Surf’s Up Batman Pop! Vinyl Figure will be available September 2016 but it can be pre-ordered now for $9.99 at Entertainment Earth.

Even the protector of Gotham City needs a little time to kick-back and relax every now and then, and the 1966 TV Surfs Up Batman Action Figure gives us a very different look at the Caped Crusader as he leaves all the hi-tech toys behind […]

The Batman Classic 1966 TV Series Vinyl Idolz Figure has 99 problems but being dark and gritty ain’t one. Actually, this retro Funko figure doesn’t even have 99 problems. Just look at the expression on his face. He’s cool as a cucumber, and why not? […]