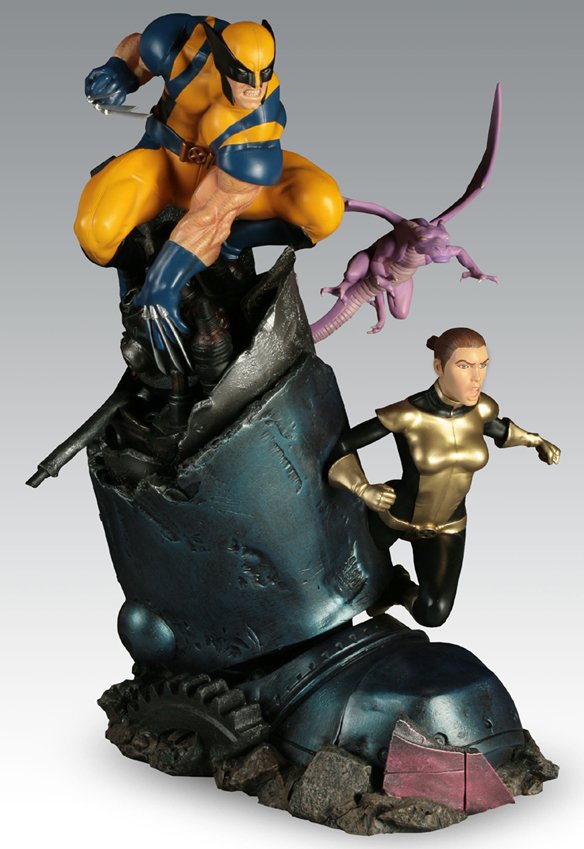 A man that can’t be killed and a woman that can’t be touched make an unbeatable team in the X-Men VS Sentinel – Wolverine and Shadowcat Polystone Diorama, featuring two of the characters that will star in the upcoming film, X-Men: Days of Future Past.

Even non-comic fans are familiar with the adamantium-laced Wolverine these days, but Shadowcat might be a little trickier because her role has been pretty small in the X-Men films. Endowed with the mutant power of phasing through solid objects, Kitty Pryde (AKA Shadowcat) plays a large role in the Days of Future Past comic arc so it will be interesting to see if she finally grabs the spotlight in the film.

The Diorama features Shadowcat and Wolverine just as they finish taking out a Sentinel. Wolverine is perched, with claws extended, on top of what’s left of the giant robot’s foot, while Shadowcat uses her mutant ability to phase through the metal. Along for the ride is Shadowcat’s dragon-looking, alien pet, Lockheed.

The Sentinel’s boot is hand-numbered on the bottom.

You can get the X-Men VS Sentinel – Wolverine and Shadowcat Polystone Diorama for $279.99 at Sideshow Collectibles.

Get your mutant-loving, movie-watching binge on with X-Men: The Adamantium Collection (Limited Collector’s Edition) and see if you can manage to pull out a Blu-ray disc without going ‘Snikt.’ The claws are out with this awesome package, featuring everyone’s favorite cigar-chomping mutant (or at least […]

Batman found a new place to watch over Gotham City, deciding that disguising himself as the Batman Sentinel of Gotham Premium Art Print and keeping an eye on things from your wall is a lot better than dealing with summer heat or winter cold. What? […]