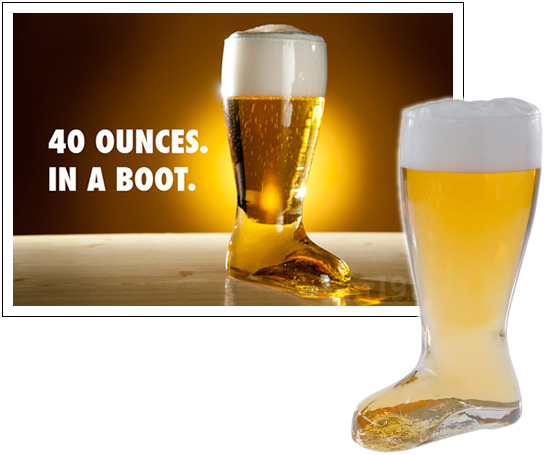 A couple days ago we posted about a huge Beer Boot, which was so big (4L/135 oz capacity) that it can hold nearly a 12 pack worth of beer. (It is the largest beer boot available in the USA.) While very cool, it just isn’t very practical. Although still quite large, this Giant Glass Beer Boot is a relative baby with a capacity of “only” 40-48 ounces. Holding 4 beers at one, it still has plenty of table presence, yet is practical enough that carrying it, drinking out of it, and finishing the contents before it reaches room temperature is reasonably accomplished.

Srsly…what were we thinking? A glass boot that could almost fit an entire 12 pack of beer? At least it would give new meaning to only having one beer.

But who says these are only for beer? You can definitely put Mountain Dew or other drinks in this, but again this 40 ouncer is a lot more useful than the 4 liter beer boot…because who drinks 4 liters of Mtn Dew? You can even use it to hold candy like Skittles, gummy bears, or M&Ms, or for office supplies like paper clips.

Personally, I think it might make a cool goldfish bowl.

Order the Giant Glass Beer Boot for $14.95 from Vat19. Also, you have to watch the hilarious Das Beer Boot Music Video below!

With summer now upon us, the barbecues and weekend parties are sure to follow.  The Australian Upside Down Beer Glass gives you that slight unique edge over your everyday beer glass and it makes a great conversation starter when you need that opening line.  While […]

If you’re having a big party, you might want to make it wild with the biggest party drink dispenser around–the Bongzilla Beer Bong. This giant beer bong is a huge step up from a basic plastic funnel from Walmart. This behemoth stands six feet tall, […]

What do you do when you want a can, but also want to drink from a stein? Well, you can have the best of both worlds with the Das Can-in-Stein. Just place a can in the stein and you have both. What could be cooler […]

Here’s a quick fact: women don’t really look too kindly on men with beer bellies. It implies that he does a lot of heavy drinking–which sometimes could be seen as irresponsible. But I doubt she’ll be looking at you any less kindly if you have […]