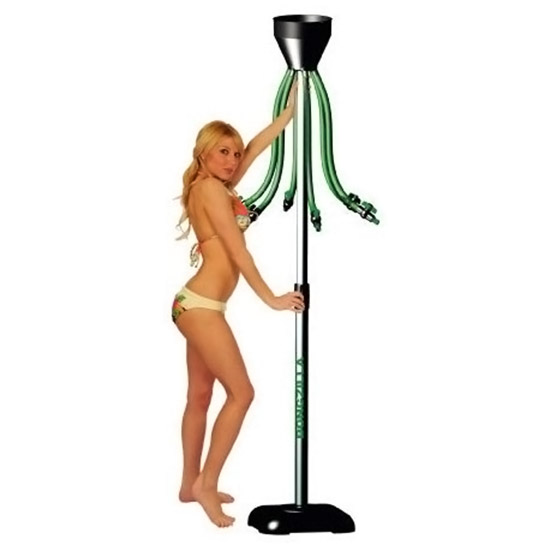 If you’re having a big party, you might want to make it wild with the biggest party drink dispenser around–the Bongzilla Beer Bong. This giant beer bong is a huge step up from a basic plastic funnel from Walmart. This behemoth stands six feet tall, holds 12 cans worth of beer, and allows 6 people to slam it down at once. If less than 6 people are partaking, just use the plug to cap off the unused tubes.

They say that bigger is always better.  (In this case, “they” might be alcoholics.) If you agree you’ll probably also be interested in these mega alcoholic beverage holders: Das Boot, Giant Beer Glass, and Sasquatch Flask. Of course, if you drink from one of these, you’ll probably need this Giant Coffee Cup the next morning.

There’s just something about abnormally huge stuff that makes seemingly ordinary things well, extraordinary. (However, an exception to the rule is the Mega Cockroach, unless you’re into insects and roaches). I mean, take lighters for example. They’re useful but they’re nothing to write home about, […]

We all know how the story goes. You’re having a get-together and you are getting thirsty, but no one wants to be the first to get up and be that guy. You know the one; the guy that then has to bring back a drink […]

With summer now upon us, the barbecues and weekend parties are sure to follow.  The Australian Upside Down Beer Glass gives you that slight unique edge over your everyday beer glass and it makes a great conversation starter when you need that opening line.  While […]

What do you do when you want a can, but also want to drink from a stein? Well, you can have the best of both worlds with the Das Can-in-Stein. Just place a can in the stein and you have both. What could be cooler […]

GeekAlerts has you some pretty neat flasks. You have the Three Wise Men Flask, which is perfect for those nights when you can’t decide on just one drink. Then there is the Notebook Flask that is great for those long nights spent at the library […]