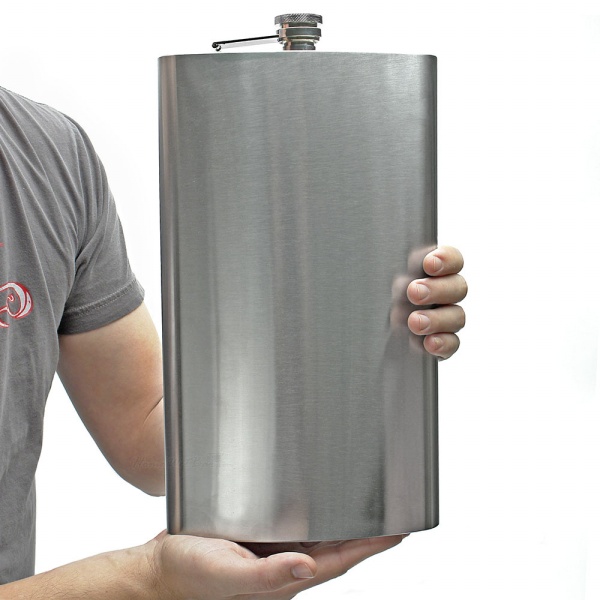 There’s just something about abnormally huge stuff that makes seemingly ordinary things well, extraordinary. (However, an exception to the rule is the Mega Cockroach, unless you’re into insects and roaches). I mean, take lighters for example. They’re useful but they’re nothing to write home about, unless they’re the Giant Lighters. Flasks are sort of like that, too, unless they’re decorated to resemble one of those old notebooks you used to carry to school like the Notebook Flask or they’re enormous, like the Sasquatch Extremely Large Flask.

The Sasquatch Extremely Large Flask is larger than the giant flask, since it has a capacity of a whopping 128 ounces! You could carry your drinks in some thermos or water jug, but hey, it wouldn’t be as fun to carry around or fun to drink. 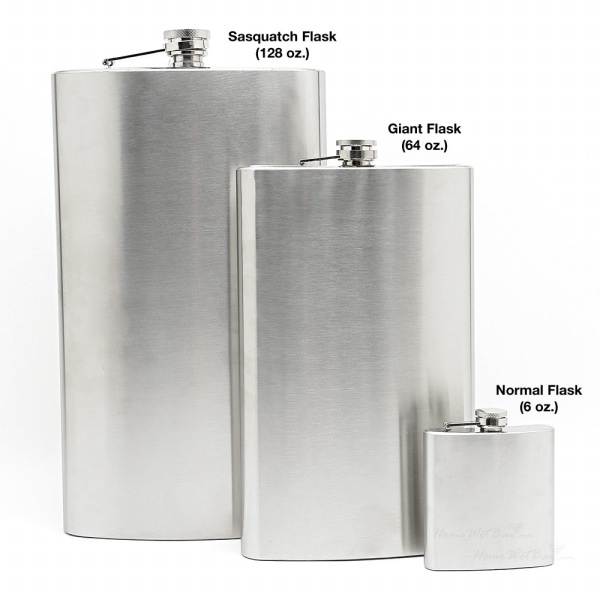 Seldom seen in the wild, but large enough to satisfy even the mighty Sasquatch’s thirst (or a party of six’s mere mortals), these giant flasks can quench the most monstrous of thirsts with a seemingly endless supply of spirits. Is straight liquor not your thing? The ginormous 128oz capacity of this large flask makes it the perfect way to carry any non-carbonated beverage with you wherever you need it as well. Made of high quality stainless steel and featuring a screw off lid, this is not only a funny flask, it is functional as well.

The Extremely Large Flask is available from Home Wet Bar for $29.95 and at Amazon.com from $21.

I’m sure you remember the Sasquatch 128oz Stainless Steel Flask; it was big enough to entertain you and several of your friends. But what about those private times when you just need a little taste of your favorite “poison?” That’s where this Belt Buckle Liquor […]

GeekAlerts has you some pretty neat flasks. You have the Three Wise Men Flask, which is perfect for those nights when you can’t decide on just one drink. Then there is the Notebook Flask that is great for those long nights spent at the library […]

GeekAlerts has shown you some pretty cool flasks in the past, but this Camera Flask may be our favorite…besides of course the Sasquatch Flask, where size really does matter. The 6 ounce Camera Flask looks like a vintage analog camera with all the knobs and […]

All of the notebooks I used when I was still in elementary and high school were those plain, ruled ones with the black, marbled cover, kind of like the one you see on the Notebook Flask. You obviously won’t be able to pass off the […]

This will probably be the highlight of your party once you display this little fella and have him serve up the alcohol. The Little Whizzer Peeing Boy Liquor Dispenser does a good job of whizzing out the drinks, but I wouldn’t recommend that you use […]

Are you one of those people that really enjoys your alcoholic beverages but you don’t want to always look like you’re ready to hit the sauce? The Alexandria Expandable Home Bar Liquor Cabinet lets you follow the Boy Scout motto of always being prepared but […]

People who want to enjoy their juice drinks with an alcoholic punch can brew their own hooch with the DIY Hooch Kit. However, if you prefer to enjoy your cocktails with a hint of chocolatey goodness, then you might opt to try the Mozart Black […]

Serve up your drinks playfully using the Gas Pump Retro Liquor Dispenser. Sure, it might look like an old gasoline pump. Even the drinks you’ve poured into it for dispensing might look like gas. But we all know that the people at the party won’t […]