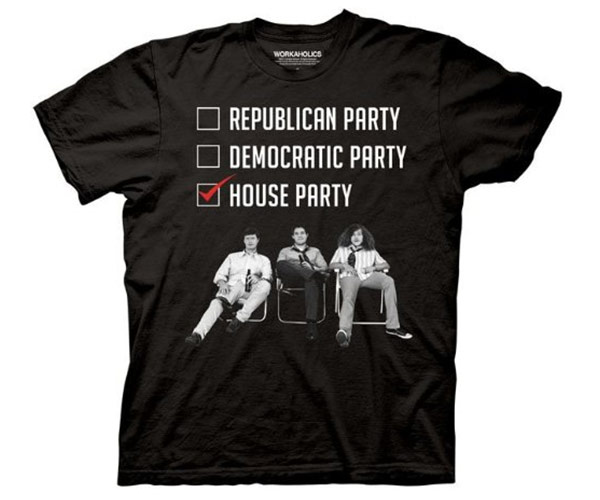 No matter what happens in the election today, about 49% of Americans are going to be bitterly disappointed. There will either be a bunch of people upset that the future holds more government and less personal freedom, or a similar sized group upset that there will be less government to take care of the people. But 2% of the people, who have no affinity for the Republican or Democratic Party, will be happy no matter what, as long as they’re having a party with plenty of beer. Those fine folks will want to wear a Workaholics House Party T-Shirt.

They often say that the candidate who is more likeable (i.e. “Who would you rather have a beer with?”) is the one people vote for. Well if that’s the case, then Blake, Adam, and Anders (the guys from Workaholics) should definitely win, because drinking a beer with them would be a blast!

Purchase the Workaholics House Party T-Shirt for $18.95 at Amazon.com. Sizes include small, medium, large, and x-large. 2X and 3X are also available for a dollar more. Don’t forget to check out Blake’s Bear Coat from Workaholics.

“Wow, that girl looks as delicious as a tall glass of iced-cold beer,” says a fellow at happy hour. “Yeah, especially when she’s wearing that hot Beer Dress,” replies his friend. It’s true that the quickest way to a man’s heart is through his stomach, and […]