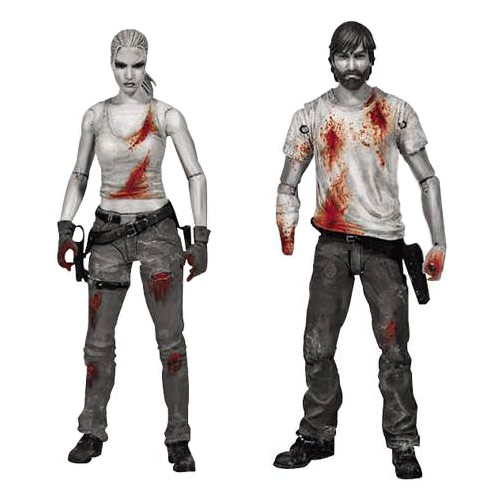 The Walking Dead Series 3 Rick Grimes and Andrea Action Figure 2-Pack offer a great way to create your own zombie apocalypse stories while sitting around waiting for the real deal.

You might have seen the comic book versions of the Governor and Penny as action figures but a villain isn’t very exciting without heroes to fight. Fortunately, things can liven up now because Rick and Andrea can always make a little trouble for their one-eyed nemesis.

Modeled after the comic book versions of the characters, both Andrea and Rick are painted with a monochrome color palette, with just a few splashes of red blood added in to emphasize how tough life is in a land ravaged by Walkers.

The 5-inch-tall action figures come with character-specific accessories, and are packaged in a displayable window box package.

While the Walking Dead Series 3 Rick Grimes and Andrea Action Figure 2-Pack won’t be available until June 2014, they can be pre-ordered now for $34.99 at Entertainment Earth.

Sometimes life piles on too much. Your wife cheats. Your son won’t stay in the house. The zombie apocalypse happens. For those times, there’s the Walking Dead TV Rick Grimes Vigilante Edition 10-Inch Deluxe Action Figure. Rick feels your pain… but he also mocks you […]