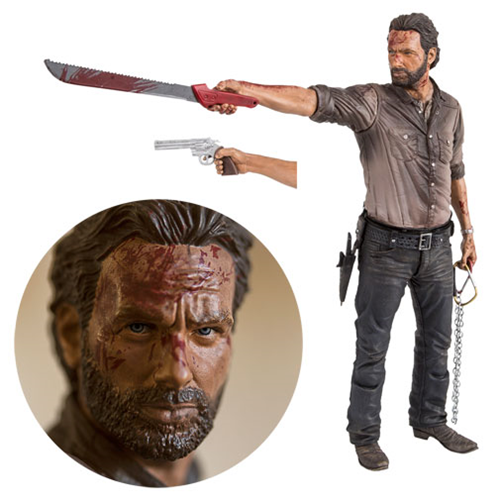 Sometimes life piles on too much. Your wife cheats. Your son won’t stay in the house. The zombie apocalypse happens. For those times, there’s the Walking Dead TV Rick Grimes Vigilante Edition 10-Inch Deluxe Action Figure.

Rick feels your pain… but he also mocks you because you don’t know what it’s like to have a bad day until you’ve ripped someone’s throat out with your teeth.

Standing 10-inches tall, this vigilante edition statue features Rick having one of those really bad days. His clothes are dirty and sweat-stained. He’s covered in blood splatter. He really needs to do battle with a bar of soap.

In addition to his blood-smeared, red-handled machete, the figure also comes with Rick’s revolver, knife, and d-rings.