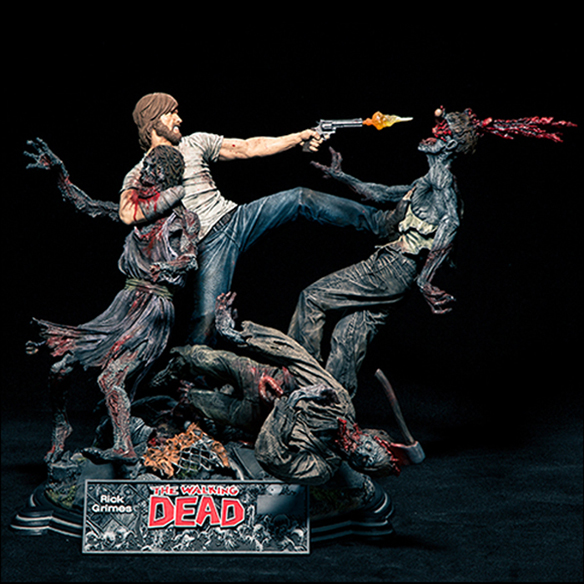 Who likes a little blood and gore with their TWD collectibles? If you raised your hand, the Walking Dead Rick Grimes Resin Statue is waiting for you with its eye-popping design.

In the comic books, Rick lost his hand and learned early on that one does not take the zombie apocalypse lightly. Since then, others have learned to not take Rick lightly because taking out three walkers at once is no big deal to him.

Standing over 14-inches tall, this detailed statue features Rick introducing a little mayhem, with one walker down due to a hatchet to the head, one walker in a headlock, and one saying goodbye to his brain (and an eye), courtesy of Rick’s trusty pistol. Each statue comes with a highly-detailed, individually-numbered plaque, a 360-degree rotating base, and a certificate of authenticity signed by both Robert Kirkman and Todd McFarlane. Also, it goes perfectly with the Walking Dead Michonne Resin Statue.

The Walking Dead Rick Grimes Resin Statue will be available October 2014 but it can be pre-ordered now for $329.99 at Urban Collector. Also at Amazon.com.