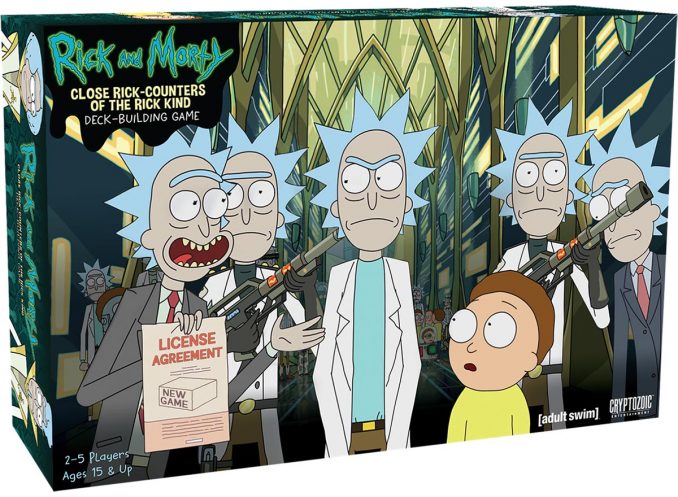 You can play as and against alternate reality versions of Rick. How awesome does that sound? The game is inspired by the first season Rick and Morty episode “Close Rick-Counters of the Rick-Kind” and it is just as crazy.

Wubba Lubba Dub Dub! The bad boys of animation are back in this exciting new Rick and Morty-themed deck-building game. Based on the bizarre dimension-hopping episode mentioned in the title, this game goes to places the Cerberus Engine has never been. Literally. The typical “Kick” stack has been replaced with Portal Guns, which can be used to access the unpredictable and awesome Location Deck. These Locations can be used that turn and then they go away, but you can also buy them if you think those alternate dimensions will aid your strategy.

Can you take down the Council of Ricks before they get too annoying and self-righteous?

Only $39.99 from ThinkGeek.com. Also available at BoxLunch.

Rick and Morty: The Ricks Must Be Crazy Multiverse Game

Rick and Morty: The Ricks Must Be Crazy Multiverse Game is a brand new board game from Cryptozoic Entertainment. In the game, you introduce marvelous power-making technology to the worlds you’ve created (stealing most of it for yourself) as you can take on the roles […]