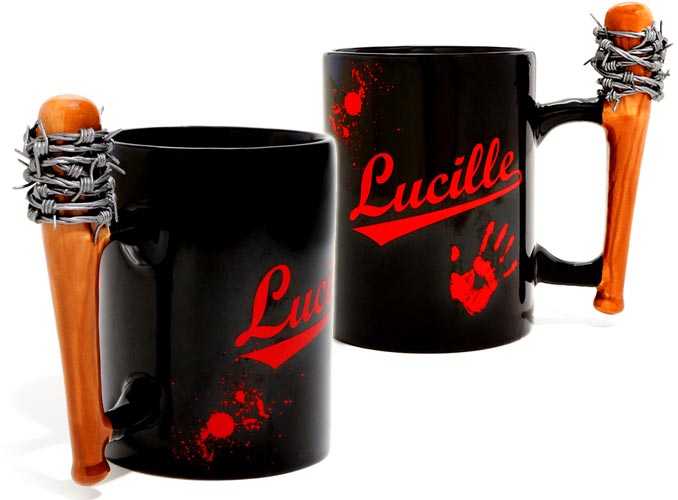 Negan loves his bat, so much so that he named it after his dead wife, Lucille. You love your coffee, so much so that you’d rather take a bat to the head than give up your morning cup. You’ll both love The Walking Dead Lucille Bat Mug, which features Negan’s bat as a handle and serves up 15 ounces of coffee.

While Lucille is a vampire bat, because she has a taste for blood, this ceramic mug is perfect for coffee. The handle looks just like Negan’s weapon of choice: a solid wooden baseball bat wrapped in barbed wire. It looks so fierce that you probably need strong coffee, such as Death Wish, to go with it.

Lucille is a vampire bat and wants blood. You, on the other hand, will settle for coffee. This black coffee mug features the bat used by Negan in The Walking Dead.

Buy The Walking Dead Lucille Bat Mug for $16.90 at BoxLunch.

Be like Negan with the Walking Dead Lucille Bracelet and still manage to stay out of jail. Things are a little different in the zombie apocalypse. For example, it’s easy to walk around with a baseball bat covered in barbed wire without winding up behind […]

The Walking Dead Clue Board Game

The Walking Dead Clue is just like the classic version of the game, only with more zombies. You gather clues and take your guess. I bet it was Negan! Did the murder happen in the armory, pantry, or Carol’s kitchen? Did Lucille do it? Or […]