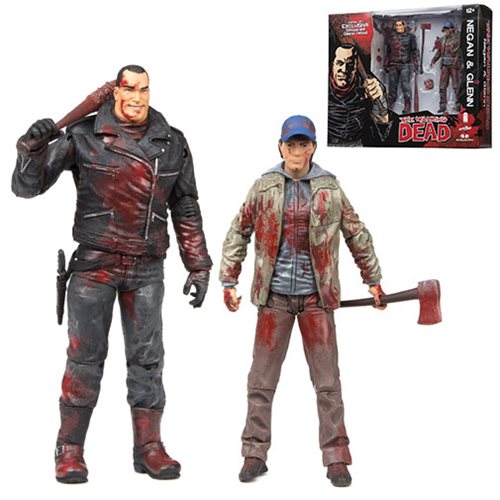 The Walking Dead Negan and Glenn Bloody Action Figure 2-Pack offers both a before and after look at Glenn when Negan and Lucille have their fun with him.

Fans of AMCs The Walking Dead are still waiting to see who Negan takes his frustrations out on but the comic book world has already experienced this loss, knowing that fan-favorite Glenn was the one violently removed from the zombie apocalypse. Will the show follow the comic or will it forge a new path?

In addition to a blood-splattered Negan and Glenn, along with multiple weapon accessories, the 2-pack also includes an interchangeable battered Glenn head.

For those who prefer the classic black and white look of the Walking Dead comic, a black-and-white version of the action figures is also available.

The Walking Dead Glenn In Riot Gear 1:4 Scale Statue lets you bring home a little action from Season 3 of the hit AMC series. Everyone knew things would get rough when it was time to battle the Governor, which is why Glenn took advantage […]

I pledge allegiance to the Walking Dead Bloody Hand Flag T-Shirt, and to the awesomeness for which it stands, one Nation under walkers, with sleepless nights, starvation, and death around every corner for all. Until the Ricktatorship is in solid control of things, a little […]