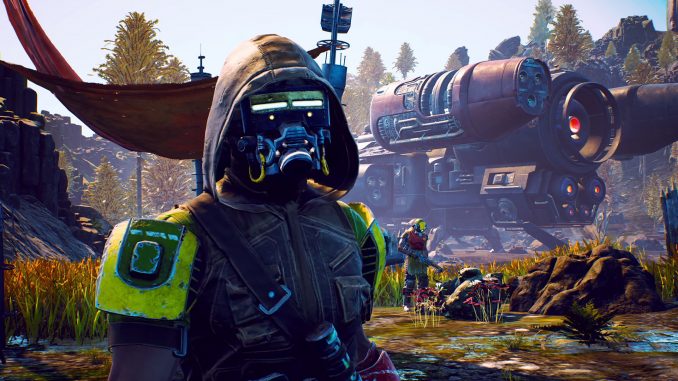 We brought you the Announcement Trailer back in December, and now for the Electronic Entertainment Expo, there’s a new The Outer Worlds E3 2019 Trailer. It’s really looking incredible, and it sounds like your role-playing options will be wide open.  As the voiceover states, you are “Someone who could be… a villain. Or a hero. Or a psychopath.”

Fans of first-person single-player sci-fi RPGs are really excited because it is coming from the original creators of Fallout and the developers of Fallout: New Vegas. The Outer Worlds will be released for PC, Xbox One, and PlayStation 4 on October 25, 2019.

The Outer Worlds is a new single-player first-person sci-fi RPG from Obsidian Entertainment and Private Division.

Lost in transit while on a colonist ship bound for the furthest edge of the galaxy, you awake decades later only to find yourself in the midst of a deep conspiracy threatening to destroy the Halcyon colony. As you explore the furthest reaches of space and encounter various factions, all vying for power, the character you decide to become will determine how this player-driven story unfolds. In the corporate equation for the colony, you are the unplanned variable.

Many gamers were left disappointed by Fallout 76, but they’ll want to check out this The Outer Worlds – Announcement Trailer. The Outer Worlds is a first-person single-player sci-fi RPG from the original creators of Fallout and the developers of Fallout: New Vegas. This game […]

If that Pac-Man Lamp was too retro for you, perhaps this Playstation Icons Lamp is more your style. It features the famous symbols from the classic Playstation controller, the green triangle, red circle, blue x, and pink square. This was the first home gaming console […]

If you’re eagerly anticipating Fallout 76, you may not have as long to wait as you thought. Although the release date for the game is still November 14, 2018, Bethesda has announced that the B.E.T.A. (Break-It Early Test Application) will start on Tuesday, October 23, […]