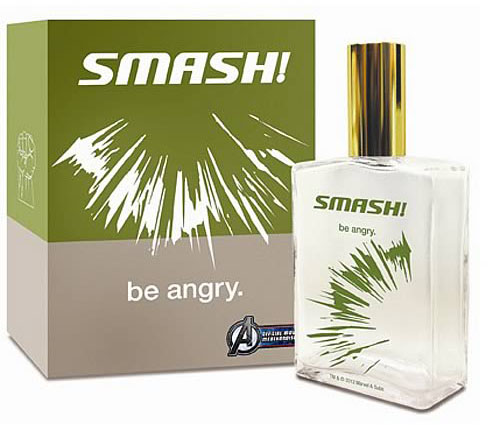 I don’t know if I’d want my man to smell like The Hulk exactly, but as they say, don’t knock it until you try it. If Gucci can bottle up the smell of Envy, I don’t see anything wrong with the Avengers having their own Smash! Be Angry Hulk Fragrance.

This fragrance is perfect for the guy who tends to be a loose cannon, but only wants to put wrongdoers in their place. He desperately tries to fit in, but once someone rubs him the wrong way he has to turn to his fists to bring forth justice. Anger management is not in his vocabulary, so you just have to let him be. Go big or go home, right?

Smash! Be Angry Hulk Fragrance
Unusual and rare materials have been brought together to create a woody and aquatic cologne evoking both a serene sense of timeless freedom and a single-minded, unbridled passion for life inside of this Avengers SMASH! Be Angry Hulk Cologne. Yuzu, bergamot and tarragon create clean, clear top notes along with unexpected accords of water lily and nutmeg. SMASH! then carries an intense woody drydown enriched with Indian sandalwood, vetiver, dry musk and warm pacific cedar. Complimentary to a full range of emotions, it wears well no matter where – at work, the lab or an evening out on the town.

Packaged in beautiful Hulk green and torn-trousers beige box, the Avengers Smash! Be Angry Hulk Fragrance is hot off the truck at Entertainment Earth for $39.99 and at Amazon for $35.22.

Entertainment Earth is having a buy one get one 20% off sale on Avengers items, so grab yourself a good deal when you purchase a second cologne from the Avengers fragrance line. As seen on GA, two fine choices would be the Avengers Black Widow Perfume and Avengers Mark VII Armor Up Iron Man Cologne.