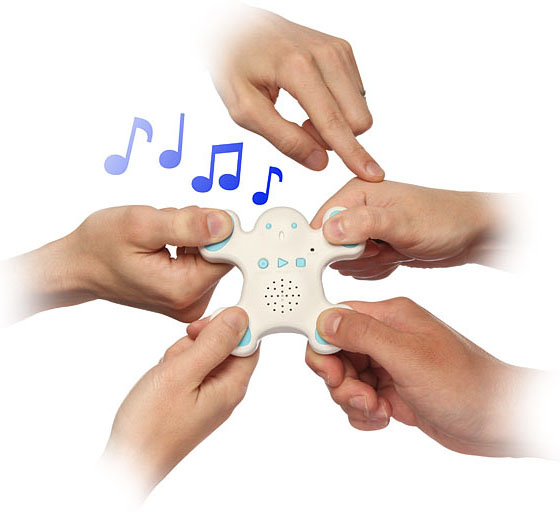 Are you finding that you and your comrades aren’t getting along so well lately? Maybe what you need to do is to gather around and make some harmonious music together with the Ningen Gakki Body-Conductive Musical Instrument. Make music, not war.

Four people can play at once. Each player puts their thumb on one of the gadget’s four grabbers. Then players can high-five, smack, poke, tickle, punch or nudge the other players to produce a synergistic symphony of sound. (Betcha can’t say that 10 times fast.) This device uses each person’s electrical conductivity to create entertaining sounds when making physical contact with any other player.

Just under 5″ in length, the Ningen Gakki can be schlepped around just about anywhere; meetings, happy hour, kids’ birthday parties, long car trips, etc.  With a name like Ningen Gakki, it’s got to be an import from Japan. They’re always coming up with the coolest stuff.

Think Geek is where you can find the Ningen Gakki Body-Conductive Musical Instrument for $49.99. Shall we rename it the NGBCMI for short?

It raised over $1 million on Kickstarter, and now the amazing Artiphon Multi-Instrument Music Maker is available to buy. With this innovative musical instrument, you can fit the whole band in your backpack and strum, tap, slide, and drum your way through an endless array […]

How many times have you kicked yourself for not pursuing a rock star career? Instead you’re at the computer tapping away at the keyboard everyday, when really you just want to bust out a pair of drum sticks and pull a Keith Moon. Now you can […]

The best toys are those that give more than just a few hours of fun to your kids. They’re the ones that will actually impart some sort of lesson or develop some sort of skill in your child. Once such toy is the Otamatone Electronic […]

There’s just something about miniature stuff that gets to me. I mean, who doesn’t want to own one of these Desktop Drum Sets that looks just like the actual thing, only many, many times smaller than the real drum sets? The thing is, the Desktop […]

My sister is expecting a little one soon, and she’s over the moon with excitement. It might not be her first baby, but she’s still as happy and giving off that beautiful pregnancy glow. She’s into music and I have a feeling her tots will […]

The Musical Ruler takes a ruler and adds a musical element just like the name implies. So when you next find yourself measuring something you can also break out into song.