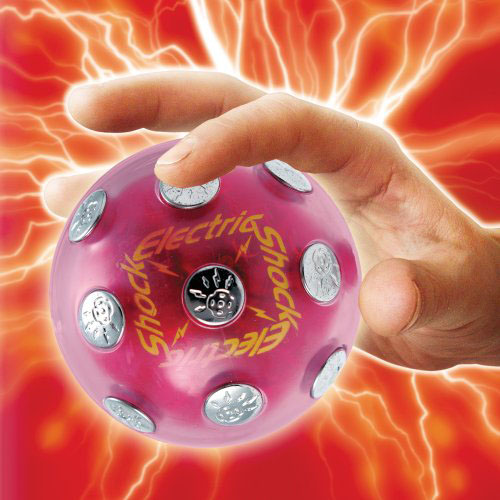 It’s all fun and games until someone gets hurt. However, with the Shock Ball Shocking Hot Potato Game, getting hurt is actually what it’s all about.  Games that induce pain are not that outlandish or new. Take for example the classics such as Red Rover and Dodgeball. What gives the Shock Ball an edge is that it involves electrocution. When playing Hot Potato, the player in possession of the ball at the end gets punished. It stinks to be the loser getting the shock, but hilarious for all the other players not getting zapped. The Shock Ball adds another level of intensity because you’re fighting to win, but you’re also not about to let your fingers get fried. Ouch!

The Shock Ball is intended for ages 14 and up, so it’s strictly for grown-up geeks. It requires 2 AAA batteries but after that, there will be lots of laughing at someone’s expense.  Being tough can be defined in many ways. Who cares if you can’t make it through the Ironman Triathlon? Being able to tolerate pain through electric shock is another way to gain some admirable props. In “Tough Guy” mode, the one who holds the Shock Ball longest wins.

The Shock Ball Shocking Hot Potato Game is available on Amazon.com from $13.99.  If you want to stick to less painful games, checkout Nightmare Before Christmas Trivial Pursuit or Doctor Who Monopoly.

The Lightnight Reaction makes the perfect accompaniment when you’re playing Truth or Dare or one of those games that don’t really have rules that are set in stone. Think someone’s lying? Was someone unable to complete the dare assigned to him? Then no worries, the […]

When you’re on the go, just wrap yourself and grab a few Zzz’s in the Slice of Pizza Sleeping Bag. But if you’re just at home and are looking for something plush, comfortable, and adorable to laze around in, then you’ll enjoy this Baked Potato Bean […]