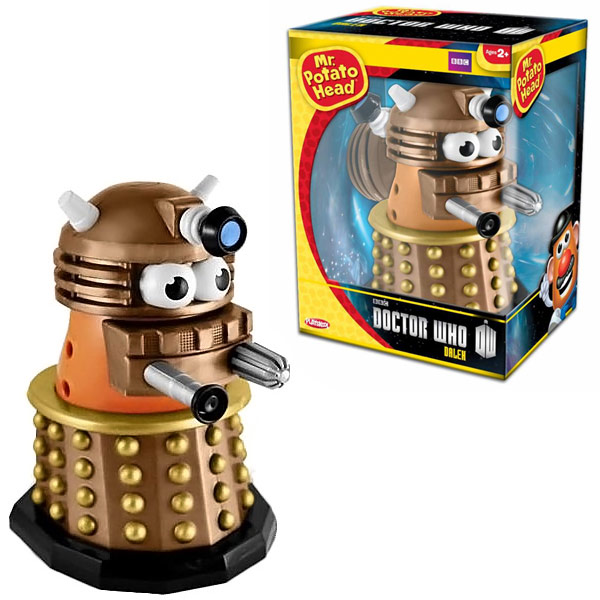 Exterminate… by adding extreme amounts of starch to your diet. The Doctor Who Gold Dalek Mr. Potato Head proves that even a potato can be scary once it’s encased within the tank-like shell of a Dalek.

The Doctor Who Eleventh Doctor Mr. Potato Head has finally met his match with a spud that has had all emotions removed except for an unquenchable hunger for starchy foods. Yes, this gold Dalek will be forced to cannibalize itself unless it can get the Doctor in its clutches. Will the mad spud in the box be able to avoid getting mashed long enough to bake his mortal enemy?

The Doctor Who Gold Dalek Mr. Potato Head will be available November 2013 but it can be pre-ordered now for $24.99 at Entertainment Earth.

The Doctor Who Monsters – Dalek Collectible Coin commemorates one the most iconic figures in the Doctor Who universe, because everybody knows the Doctor would just be a madman wandering aimlessly through time and space if it weren’t for awesome villains constantly making him be […]

Avocado by day. Vigilante by night. Potato all the time. The Daredevil Mr. Potato Head is the Spud Without Fear. You’ve gotta have a lot of starch to deal with the heat in Hell’s Kitchen. Luckily, this 5 1/2-inch tall figure is the starchiest guy […]

Don’t forget to take the Predator PopTaters Mr. Potato Head with you when you get to the chopper. The ultimate hunter meets the ultimate potato with this approximately 6-inch-tall spud based on the alien hunter in the 1987 film, Predator. Equipped with ugly feet, a […]