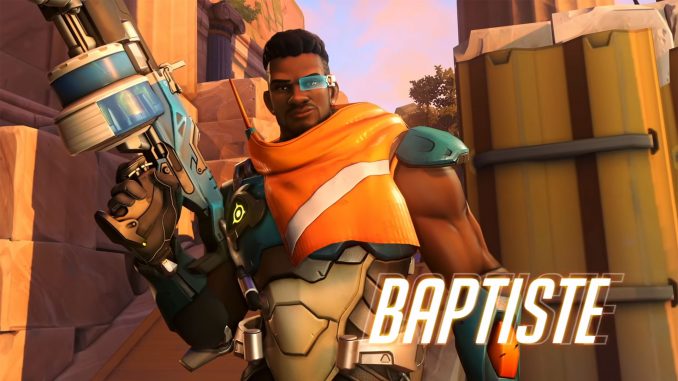 We saw the Baptiste Origin Story Video a few weeks ago, and now the New Overwatch Hero Baptiste has been released. Just fire up Overwatch and install the March 19, 2019 update (Patch 1.34.0.1) to play with the new hero. Everyone will want to play with Baptiste to try him out, so go to Arcade and choose the No Limits game so that you can play him too no matter what heroes your teammates choose.

To get a general feel for Baptiste’s weapons and abilities, check out the Intro Video below. For a more technical, but less dramatic, look at the abilities, watch the Patch 1.34 Highlights video at the bottom of this article, or read the detailed Patch Updates.

This combat medic is no angel of mercy. Baptiste is reporting for duty.

Baptiste is battle-hardened combat medic who wields an assortment of experimental devices and weaponry to keep allies alive and eliminate his enemies. Baptiste’s Biotic Launcher fires a three-round-burst that rewards accuracy and recoil control with significant damage output. His alternate fire lobs grenades that heal allies near the point of impact. With Regenerative Burst, Baptiste activates an intense surge that heals himself and nearby allies over time. When danger is near, Baptiste can toss out his Immortality Field to prevent allies from dying. Baptiste moves around the battlefield with Exo Boots, jumping over obstacles and clearing distances that would stop other heroes. Baptiste deploys his Amplification Matrix as his ultimate, which doubles the damage and healing effects of friendly projectiles.

Baptiste wields an assortment of experimental devices and weaponry to keep allies alive and eliminate threats under fierce conditions. A battle-hardened combat medic, he is just as capable of saving lives as he is taking out the enemy.

Baptiste’s three-round-burst Biotic Launcher rewards accuracy and recoil control with significant damage output. It also doubles as a healing device, lobbing projectiles that heal allies near the point of impact.

Baptiste activates an intense regenerative burst that heals himself and nearby allies over time.

Baptiste uses a device to create a field that prevents allies from dying. The generator can be destroyed.

Baptiste creates a matrix that doubles the damage and healing effects of friendly projectiles that pass through it.

Jurassic Park wasn’t the only high definition release today; The Matrix Was Released on 4K Ultra HD as well. While some 4K releases are low quality because they are basically just upsampled versions of the Blu-ray, The Matrix 4K UHD is the real deal—it is […]