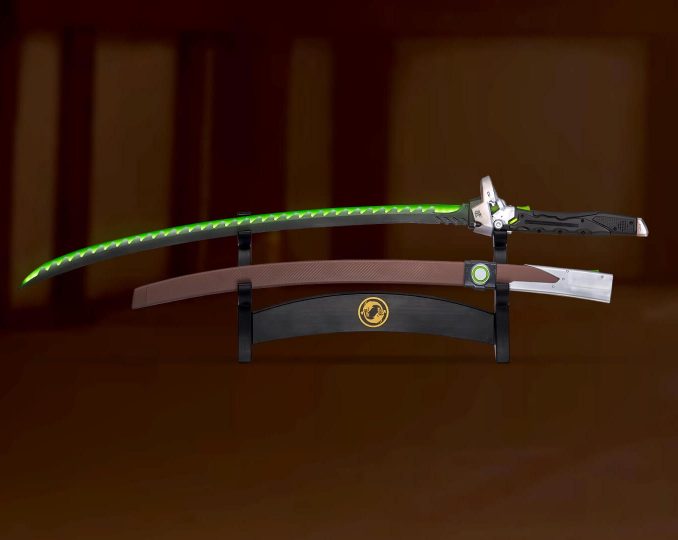 Collectors of swords and edged weapons who also happen to be fans of Blizzard’s Overwatch video game have the perfect collector’s item with this Overwatch Ultimate Genji Sword.

Genji, a cyborg ninja adept at inflicting damage, is one of the heroes that has been available since Overwatch launched. When he’s not flinging Shuriken at his enemies, he uses his technologically-advanced katana to slice through his targets or deflect oncoming projectiles back at his opponents. This Overwatch Ultimate Genji Sword is a physical replica of his katana.

Featuring premium construction, this Genji sword comes with a sheath and a display stand. With LED illumination, it looks especially cool in the dark, while the motion sound effects make it fun to play with and recreate Genji’s Ultimate ability.

“Life and death balance on the edge of my blade.” The death of his father nearly resulted in his own. Transformed into a living weapon by Overwatch, Genji set about the task of dismantling his family’s criminal empire. After his mission was completed, he abandoned Overwatch to wander the world. Even he cannot say where his path will lead.

Pre-order the Overwatch Ultimate Genji Sword now for $200 at Blizzard Gear. It is expected to ship by December 15, 2018, for the holidays.

Unless you’re Captain Hook, you and all the other mateys on board might occasionally run into trouble opening envelopes filled with death threats or missing map pieces. Don’t be a scallywag, giving yourself surprise paper cuts and then get tossed overboard to the sharks when you fail to open the […]