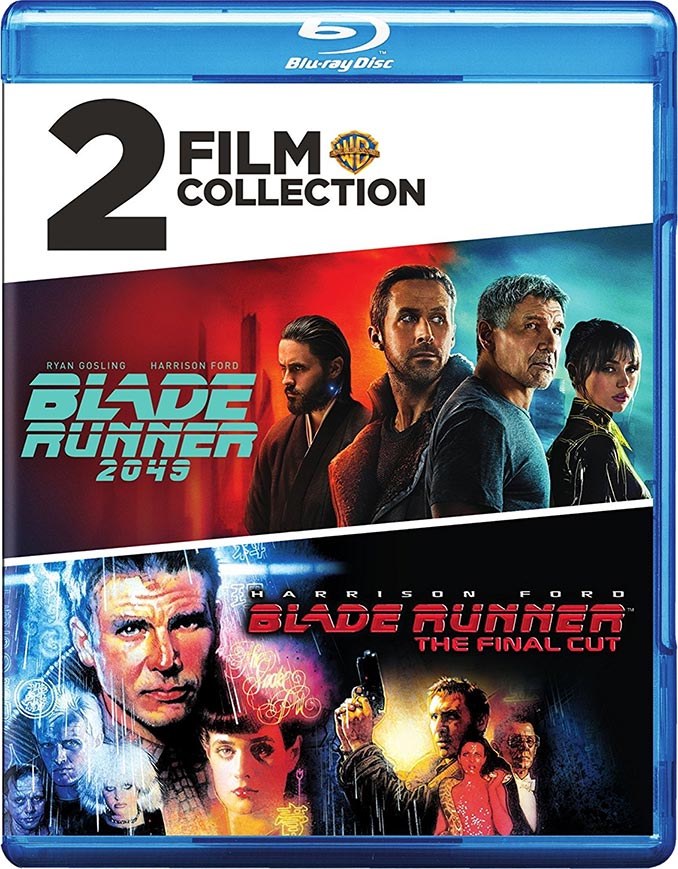 Today Warner Brothers released the Blade Runner: 2 Film Collection on Blu-ray & DVD. For one low price you get Blade Runner 2049 starring Ryan Gosling and directed by Denis Villeneuve as well as Blade Runner: The Final Cut, the 2007 re-release of the 1982 cult hit starring Harrison Ford. This version, also known as the 25th-Anniversary Edition, was the one where Ridley Scott finally had complete artistic control.

Thirty years after the events of the first film, a new blade runner, LAPD Officer K (Ryan Gosling), unearths a long-buried secret that has the potential to plunge what’s left of society into chaos. K’s discovery leads him on a quest to find Rick Deckard (Harrison Ford), a former LAPD blade runner who has been missing for 30 years.

Visually spectacular, intensely action-packed and powerfully prophetic since its debut, Blade Runner returns in Ridley Scott’s definitive Final Cut, including extended scenes and never-before-seen special effects. In a signature role as 21st-century detective Rick Deckard, Harrison Ford brings his masculine-yet-vulnerable presence to this stylish noir thriller. In a future of high-tech possibility soured by urban and social decay, Deckard hunts for fugitive, muderous replicants — and is drawn to a mystery woman whose secrets may undermine his soul.

These Blade Runner 2049 7in Action Figures will let you re-enact your favorite scenes from the hit movie. You can choose Officer K or Deckard. They look just like Ryan Gosling and Harrison Ford. Each figure comes with a gun accessory. They make a great […]

Do you remember Harrison Fords character, Rick Deckard, in the classic movie Blade Runner? If not, go rent the movie and you’ll see it rains a lot in the future and you’ll need an umbrella; so you might as well use the same styled one […]

Rick Deckard proved that retiring replicants isn’t as easy as it sounds but he got to carry a cool gun, and now you can, too, with the Limited Edition Blade Runner Blaster Replica. After undergoing a few revisions to the design, this new Blaster Pro […]

I’ve seen the coolest drinking glass props in Sci-Fi TV shows and movies that I wished they would make, but sadly most of the time they never do and so I use boring drink ware. But now they have created a really cool Sci-Fi glass […]

You know it. You love it. They are the most popular words ever to grace any movie screen. Now you can enjoy the Star Wars opening crawl on your floor with this Star Wars A New Hope Title Crawl Floor Runner. It will make your […]

This “Force FX” Star Wars lightsaber, licensed by LucasFilm, comes with a glowing blade that is easily and quickly removable. It also features realistic power-up/down and sound effects. The blades light from the bottom up (with sound, of course) and fade from the top down […]

What makes an incredibly tiring day at work even worse is getting to your car and noticing that there’s bird poop on your windshield, or some other messy gunk that’s muddying up your windshield. Without thinking and almost automatically, you switch the wipers on–only to […]