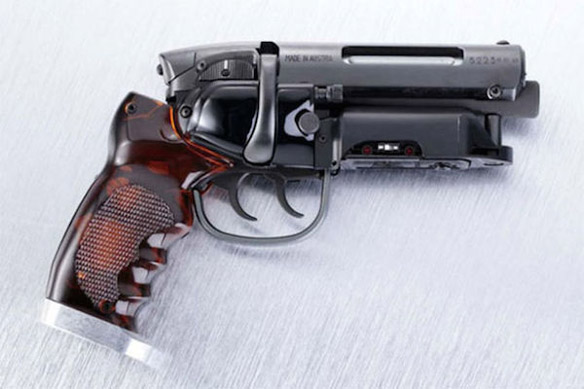 Rick Deckard proved that retiring replicants isn’t as easy as it sounds but he got to carry a cool gun, and now you can, too, with the Limited Edition Blade Runner Blaster Replica.

After undergoing a few revisions to the design, this new Blaster Pro edition replica of the firearm used by Harrison Ford in the film is “the most accurate version of this blaster ever offered,’ complete with light-up LEDs, a double trigger, and five bullets to take down runaway replicants.

If you’re a Blade Runner fan or just like big screen firearms, you will not want to wait to get your hands on this because there are only 50 for the U.S. Market. That’s right. 50. Seriously, don’t wait… and be prepared for a little sticker shock because the extreme limited edition status of this collectible results in the expected jump in price.

The Limited Edition Blade Runner Blaster Replica will be available August 14, 2014 but it can be pre-ordered now for $899.95 at Hollywood Collectibles Group.

Do you remember Harrison Fords character, Rick Deckard, in the classic movie Blade Runner? If not, go rent the movie and you’ll see it rains a lot in the future and you’ll need an umbrella; so you might as well use the same styled one […]

I’ve seen the coolest drinking glass props in Sci-Fi TV shows and movies that I wished they would make, but sadly most of the time they never do and so I use boring drink ware. But now they have created a really cool Sci-Fi glass […]

These Blade Runner 2049 7in Action Figures will let you re-enact your favorite scenes from the hit movie. You can choose Officer K or Deckard. They look just like Ryan Gosling and Harrison Ford. Each figure comes with a gun accessory. They make a great […]