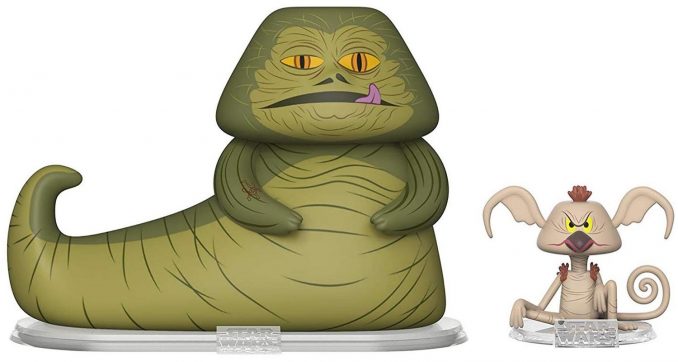 Just about everyone knows Jabba the Hutt, but you have to be a true Star Wars geek to know his sidekick, Salacious B. Crumb, by name. Get cute cartoon-styled vinyl figures of both of them with this Funko Vynl Jabba The Hutt & Salacious Crumb set.

Like all Funko Vynl, this set contains two closely related characters. (There’s no “i” in Vynl. – because there’s always two of them!) Jabba the Hutt (Jabba Desilijic Tiure) is a crime lord with an immense physical size who rules his criminal empire from his palace on Tatooine, while Salacious Crumb is his tiny monkey-lizard jester.

There’s no “i” in Vynl. – because there’s always two of them!

Star Wars Jabba The Hutt & Salacious Crumb from Star Wars come together for the all-new Vynl. line of cartoonish vinyl collectibles from Funko!

Buy the Jabba The Hutt & Salacious Crumb Vinyl Figures for $13.52 (the current sale price at the time of publication, which is 20% off the regular $16.90 price) for the set at BoxLunch. Also available at Hot Topic and Walmart.

These new Jabba The Hutt / Pizza Hut Style T-Shirts and Hoodies combine one of the most infamous villains from Star Wars with the logo of the famous pizza chain. You end up with these awesome shirts that work regardless of whether you are wearing […]

This Star Wars Jabba the Hutt Inflatable is practically life-size. It measures 6 foot tall by 10 foot long and will look very intimidating on your lawn. Especially if you have someone dressed as Slave Leia. Perfect as a Halloween decoration or for a Star […]

Star Wars fans are going to love this deal. You can get this Disney Star Wars Large Tsum Tsum Jabba the Hutt 20″ Plush Toy for only $6.99. That’s 80% off the original price. And this Star Wars Jabba is not some small plush toy. […]

Han Solo would never be able to hug this lovable Star Wars Jabba the Hutt 12-Inch Talking Plush, but that doesn’t mean you can’t. Cuddle up with this wonderful, talking, soft plush Jabba the Hutt. He won’t put a bounty on your head or try […]

Return of the Jedi had some amazing scenes. The dual between Luke and Vader at the end, the Ewoks and of course the scene from Jabba’s palace. You can now re-live that scene with the Jabba the Hutt’s Throne Playset. This playset features 3 figures, […]