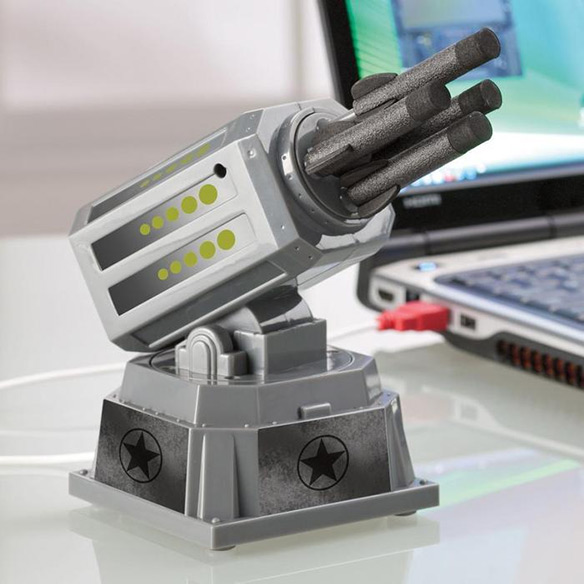 We’ve seen a number of USB missile launchers before, such as the Thunder Missile Launcher and the iPhone Controlled Missile Launcher. There was even the USB Circus Cannon that only costs 10 bucks. Even though the concept isn’t new, this latest USB Missile Launcher With Webcam is still a cool product for anyone that ever gets bored at their computer. What could be better for office hyjinx than a foam missile fight?

This missile launcher hooks up to your PC or Mac computer using the included USB cable. Then you can control it right there with your computer or from anywhere in the world using the built-in webcam combined with Internet controls. It even allows you to use MSN messenger or Skype to direct the missile assault.

Aim the missiles by pivoting the launcher and adjusting the elevation, and then fire one of the four soft foam missiles when ready. It will launch up to 25 feet while the next missile rotates into position. You can even choose to have sound effects to accompany the launch, or keep it silent for a sneak attack. 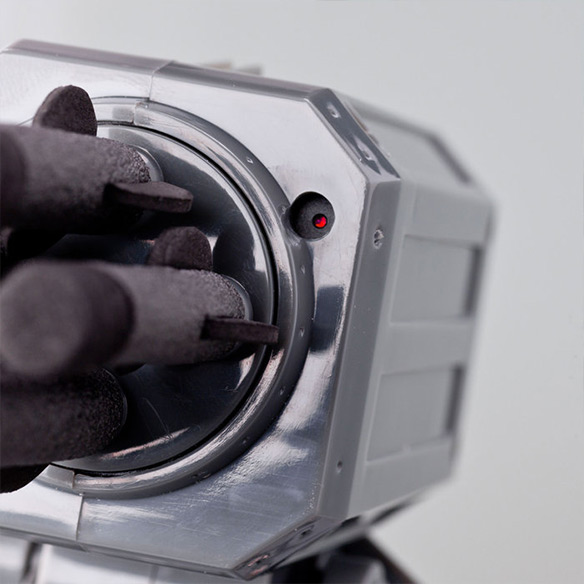 This USB Desktop Missile Launcher has a built-in webcam and over-Internet control that makes it easy to hit targets at distances up to 25 feet—whether you’re in the room, or 6,000 miles away! You can even direct missile assaults remotely, via Skype and MSN messaging programs. Or keep targets guessing, by handing over command capabilities to anyone on your buddy list.

Currently this USB Missile Launcher is on sale for only $39.99 at Brookstone.com and Amazon.com.

3-in-1 Skype Webcam, Speaker and Microphone

They call it a 3-in-1 Skype Speaker, but this combination webcam, microphone and speaker can be used by all kinds of video conferencing and web chat applications. Instead of cluttering your desk with separate speakers, webcams and microphones, this handy USB gadget allows you you […]

Last month we covered the Spyfire R/C Blaster here at GeekAlerts and now yet another follow-up to the original USB missile launcher has been announced. This time it’s Marvel who has come up with a friendly neighborhood Spider-Man model.

So, yesterday we saw the USB Missile Launcher with Webcam and today it’s time for yet another new approach on this product; a wireless version.

Your webcam can also be a cute toy if you have this USB Basketball Player Web Cam. While it functions as a USB webcam with built-in microphone, you can do more than video conference with this gadget. The camera head, arms, and legs are pose-able, […]

The slim CM-3204 USB Portable Skype is a handy little gadget allowing you to use Skype or other VoIP from various computers.

If you don’t want to use your computer mouse or keyboard as a Skype phone, simply plug this little communication gadget into the USB port instead.

Remember that fun Japanese USB Mirror Webcam from Thanko that we wrote about last year? The product, which previously was hard to get outside of Japan, is now available with worldwide shipping from the USB Brando website.