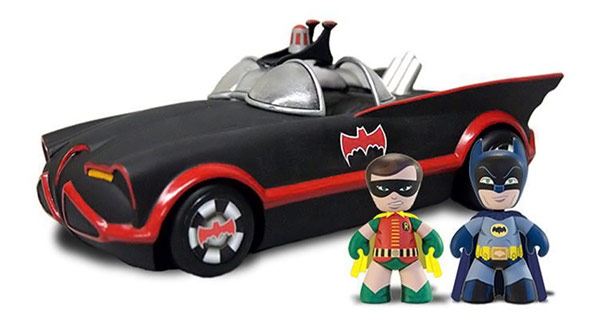 Atomic batteries to power. Turbines to speed. It’s time to get your 60’s groove on with the Batman and Robin DC Mini Mez-Itz with 1966 Batmobile Vehicle.

Gotham City can rest easy because the Dynamic Duo are on patrol with two Mez-It mini-figures and a Batmobile based on the one created by automobile-customizer George Barris for the Batman TV series, complete with iconic “bubble” windshields, Bat-Radar, Bat-Lights, Bat-Hubcaps, and sculpted Bat-chutes. The cockpit even features detailed graphics such as the Bat-scope viewing screen.

The Batman and Robin mini-figures stand 2-inches tall, feature real cloth capes, and have 5 points of articulation. It’s also indicated this is the first time the characters have been portrayed in their television-style outfits for designer-vinyl figures, although I’m not 100% sure about that claim so don’t throw a Batarang at me if the statement is incorrect.

The Batmobile and the figures are packaged together in a collector-friendly window box that allows for display without removal from the box but if you do decide to actually play with the toys, you’ll be happy to know the figures do fit in the vehicle.

The Batman and Robin DC Mini Mez-Itz with 1966 Batmobile Vehicle is available for $32.99 at Entertainment Earth and $29.99 at Amazon.com.