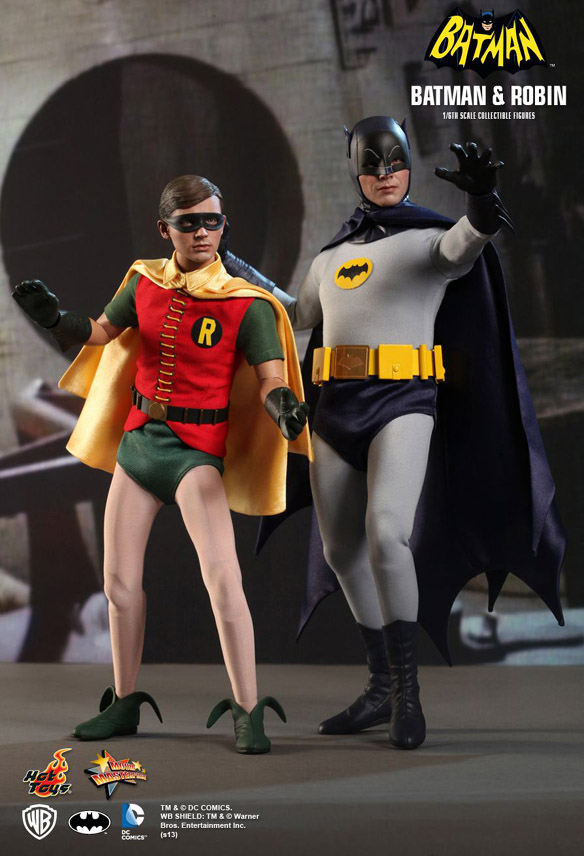 Holy Retro-Action, Batman! The Caped Crusader and his trusty sidekick are ready to add a little vintage action to your Bat-collectibles with the 1966 Batman and Robin Sixth-Scale Figures, based on the 1966 Batman movie that was inspired by the popular television series.

These highly-detailed figures are specially crafted and feature screen-accurate masked head sculpts of Adam West and Burt Ward, along with their classic costumes and accessories that all fans of the film will instantly recognize, from Batman’s trusty Shark Repellent to that pesky bomb he had such a hard time disposing of. There’s even a set of hands that let you duplicate that memorable go-go dance, the Batusi.

Of course, Robin also has his own collection of interchangeable hands and accessories to insure that he’s ready for anything the scourge of Gotham City might toss his way.

As if all that Bat-goodness wasn’t enough, there will even be a 1966-style Batmobile coming in the future so the Dynamic Duo won’t be stuck having to take a taxi or ride a bus while waging their war on crime.

The Animated Series Batman and Robin Figures with Bat-Signal

These Batman: The Animated Series Batman and Robin Figures with Bat-Signal are all you need to have adventures with the animated version of the duo. The Caped Crusader and the Boy Wonder are ready for action. They come with a battery-powered Bat-Signal! Batman stands about […]