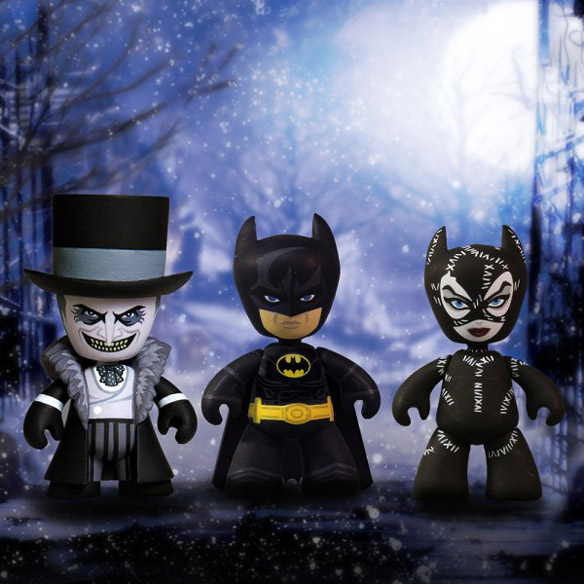 Mistletoe can be deadly if you eat it but you won’t have that problem with the Batman Returns Mini Mez-Itz 2-Inch Mini-Figure 3-Pack. Of course, you probably still shouldn’t eat it.

Based on the iconic performances of Michael Keaton, Danny DeVito, and Michelle Pfeiffer in 1992’s Batman Returns, these mini-figures stand approximately 2-inches tall and feature 5 points of articulation. Batman has his cape, and The Penguin comes with a removable top-hat and sculpted coat, but poor Catwoman doesn’t get any goodies like that, having to settle for the detailed stitching that made her Catwoman so unique.

The Batman Returns Mini Mez-Itz 2-Inch Mini-Figure 3-Pack will be available June 2016 but it can be pre-ordered now for $19.99 at Entertainment Earth.

Christmas is a great season for many reasons. You get to feast on delicious food, meet up with family and friends, get a couple of days off from work, and kiss people you’ve always wanted to kiss, thanks to mistletoe. However, it’s going to be […]

As usual, the team here at GeekAlerts has been busy finding all kinds of cool products to post about. This past week we posted price comparison shopping information on Star Wars: The Complete Saga on Blu-ray. We covered products like the Batman Light Signal Keychain, […]