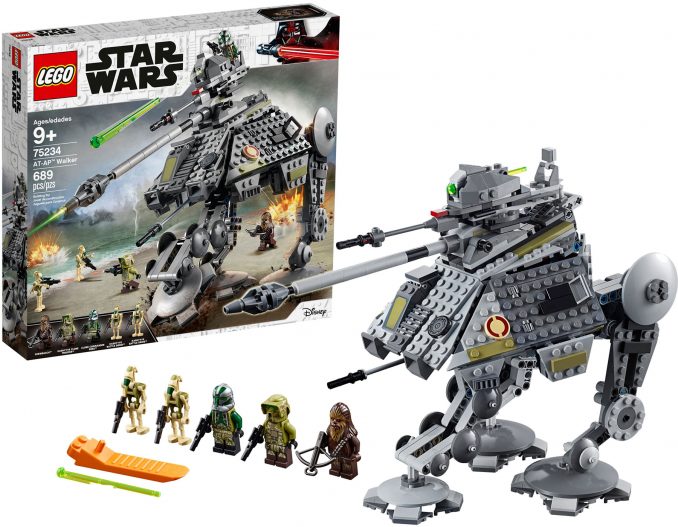 I’ve been a huge fan of walkers ever since the first AT-AT stomped onto the screen in The Empire Strikes Back. That film featured the AT-AT and AT-ST, and since then we were also introduced to numerous other models of walkers. One of them, the All Terrain Attack Pod is now available in a buildable form with the LEGO Star Wars: AT-AP Walker #75234.

Comprised of 689 pieces, LEGO Star Wars 75234 AT-AP Walker set allows you to build an All Terrain Attack Pod that stands over 9″ tall and measures over 11″ long. Features include a rotating and elevating top turret, spring-loaded shooter, retractable third leg, opening top and sides, and a detailed interior 2-minifigure cockpit.

Also included with the set are 2 Kashyyyk Battle Droid figures as well as minifigures of Chewbacca, Clone Commander Gree, and a Kashyyyk Clone Trooper. You also get their weapons: Chewbacca’s bowcaster and 4 blasters.

Add some heavy firepower to any LEGO® fan’s collection with the tough LEGO Star Wars™ 75234 AT-AP Walker. This impressive model features articulated legs and a retractable third leg, plus an opening top and sides that reveal a detailed 2-minifigure cockpit. The model also includes a rotating and elevating top turret with a seat for a minifigure and a spring-loaded shooter for exciting battling action. With Chewbacca, Clone Commander Gree and Kashyyyk Clone Trooper minifigures plus 2 Kashyyyk Battle Droid LEGO figures, this collectible construction toy makes for a great birthday gift for kids.

This new LEGO Star Wars: AT-AP Walker is available for $59.99 at LEGO Shop.