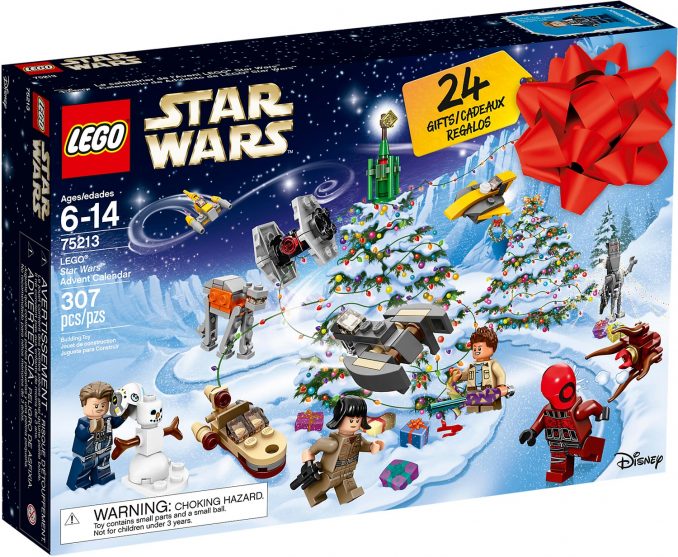 Most kids love Advent calendars since they’re the gift that keeps on giving. Each day they have something to look forward too—opening the Advent calendar for a small present. For people that love LEGO and Star Wars, there’s no better Christmas Advent calendar this year than the official LEGO Star Wars Advent Calendar 2018.

Open the doors of this galactic 75213 LEGO Star Wars Advent Calendar each day in December to discover themed LEGO minifigures, starships, vehicles and other collectibles. When you’ve opened all the doors, there’s even a foldout playmat with desert and ice-planet scenes for playing out epic Star Wars adventures. This great gift with 5 minifigures and 3 figures is the perfect way for fans of all ages to get ready for the holidays.

Christmas is getting closer and it is such a big holiday for so many people all around the world. Adults and kids alike love receiving and giving gifts to family and loved ones. I know we already showed you the LEGO Star Wars Advent Calendar; […]

Summer is over and before you know it, Christmas will be here.  Enjoy that final 24 day countdown in LEGO Star Wars fashion with the LEGO Stars Wars Advent Calendar.  This fun calendar has 24 different LEGO Star Wars themed gifts behind the windows; including […]

You know what it means once November rolls around; Christmas is going to sneak up on us and punch us in the guts. Many of you might have already prepared for the madness and purchased the LEGO Star Wars Advent Calendar 2012. Some of you […]