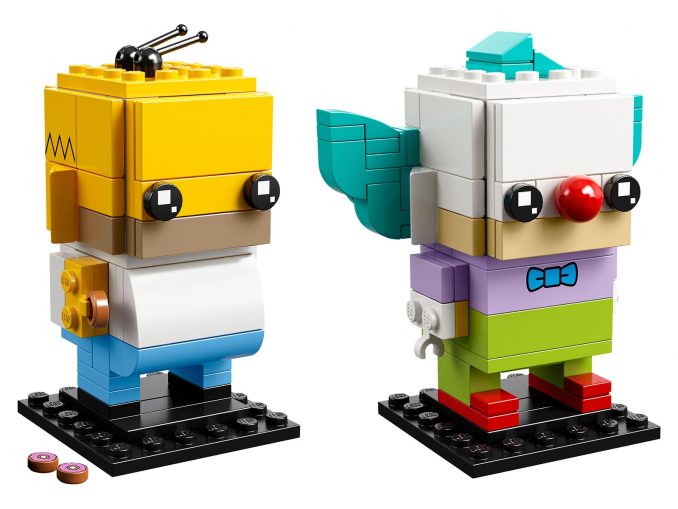 LEGO BrickHeadz are similar to Funko Pop figures, except that you build them from LEGO pieces. They’re also like Funko Vynl, because most of the newer sets come with a pair of related characters. That’s true for this LEGO BrickHeadz Homer Simpson & Krusty the Clown Set, as well as the Newt Scamander & Gellert Grindelwald and Jurassic World Owen and Blue sets we recently covered.

This LEGO BrickHeadz Homer Simpson & Krusty the Clown #41632 comes with 215 pieces to build two of the most popular characters from The Simpsons. There are plenty of details in these characters, such as Homer’s balding head and pink donut, and Krusty’s red nose and green hair. Each 2+” tall completed figure and be displayed on the included collector’s baseplates.

This LEGO BrickHeadz 41632 Homer Simpson & Krusty the Clown play set is fun to build using colorful LEGO bricks that recreate all their iconic details from The Simpsons animated television series, including Homer’s balding head and favorite pink donut, plus Krusty’s hilarious green hair and red nose. Each buildable figure stands on a collector’s baseplate with BrickHeadz logo for easy display in your home, office or on any sofa you like.

Buy the Homer Simpson & Krusty the Clown BrickHeadz set for $19.99 at LEGO Shop.

If you couldn’t resist the Simpsons Doughnut Maker and Homer Simpson Talking Shower Radio, you might want to add the Animated Homer Simpson Multi-USB Port ($50) to the rest of the collection. (Link removed because the page is gone.) Plug in with up to four […]

Woo Hoo! It’s the Simpsons 25th Anniversary Homer Simpson Mr. Potato Head. He is the perfect toy to celebrate 25th years of the hit TV show. The man is a legend, an icon and possibly America’s greatest TV dad. He comes with his classic white […]

The Simpsons Homer Simpson with Donut Bust Bank will help you save money and celebrate your love of donuts at the same time. Nothing beats some spare cash and a donut. You can’t have one without the other. If you save enough money you might […]