We all love LEGOs and the simplicity behind the basic building concept, not to mention that they usually come in some pretty cool themes like Star Wars and Disney Pixar Cars.  The LEGO Architecture Fallingwater is part of LEGOs age 16+ architect series that represents some of the most amazing buildings in our society (Guggenheim Museum, Burj Khalifa, The White House, Seattle Space Needle, and several others).  The Fallingwater house is considered to be Frank Lloyd Wrights masterpiece; combining man with nature in Pennsylvania, USA. 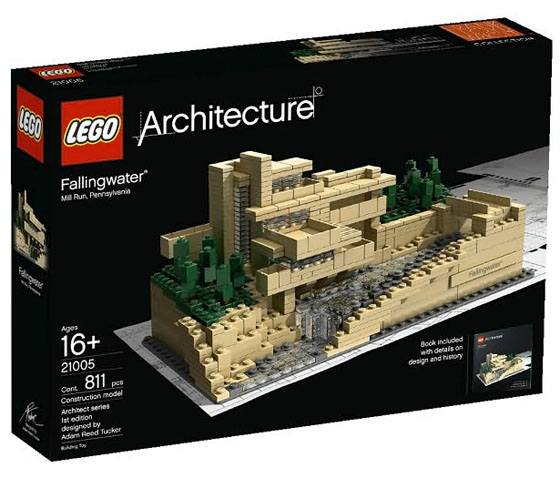 Designed by Frank Lloyd Wright in 1934, Fallingwater® is perhaps the most famous residential home in the world. Open to the public since 1963, this masterpiece exemplifies Frank Lloyd Wright’s organic architectural style by intimately merging man with the surrounding landscape. This highly-detailed LEGO® model, co-developed and designed by architect Adam Reed Tucker, captures all of the distinctive features that make Fallingwater an architectural landmark.

The assembled Fallingwater model stands 10 inches (256 mm) wide on a gray base with printed name label and includes a booklet with facts about the building, its construction and its history. A striking and imaginative display for your desk, bookshelf or mantelpiece!

You can purchase the LEGO Architecture Fallingwater at Amazon.com from $96.95.