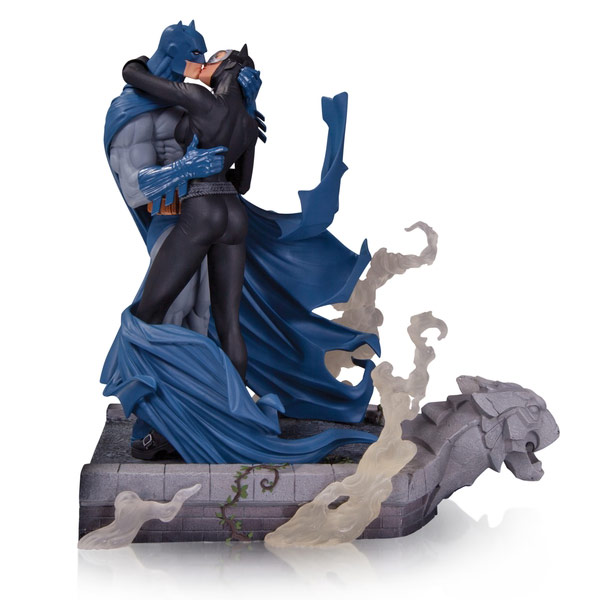 Batman doesn’t always punch the bad guys in the face. Sometimes, as shown in the DC Collectibles Hush Batman and Catwoman Kiss Statue, he pulls them close and gives them a big kiss.

Okay, chances are good the Dark Knight doesn’t show this kind of affection to just anybody so the Joker probably shouldn’t be puckering up anytime soon, but Catwoman isn’t 100% bad; she just needs a little guidance and affection… and she seems to have the affection part taken care of. Besides, Superman and Wonder Woman locked lips with their own statue and it wouldn’t be fair if Gotham City’s protector wasn’t allowed to get in on that kind of action.

The 11-inch-tall statue, featuring the Bat and the Cat in a scene from the Batman: Hush graphic novel, is part of a limited edition of 2,500 pieces.

The Hush Batman and Catwoman Kiss Statue will be available February 2014 but can be pre-ordered now for $204.99 at Entertainment Earth.

Batman and Catwoman Kiss Phone Case for iPhone and Galaxy

Fans of Batman: Hush will want to take their calls with a phone covered by this Batman and Catwoman Kiss Phone Case for iPhone and Galaxy. Everyone knows about that famous (infamous?) kiss between the Bat and the Cat; even people who never read Hush […]

It was the kiss heard around the comic book world when the Man of Steel locked lips with the Amazon Princess in DC Comics New 52, and the Superman and Wonder Woman: The Kiss 12-Inch Statue lets you bring that memorable image home. The highly-detailed, […]

The DC Comics The Joker Harley Quinn Kiss Top shows us the lip-lock that fans have been waiting for as Harley gets a little busy with Mr. J. What? This isn’t your idea of romance? I don’t know why not. After all, we’ve seen Batman […]