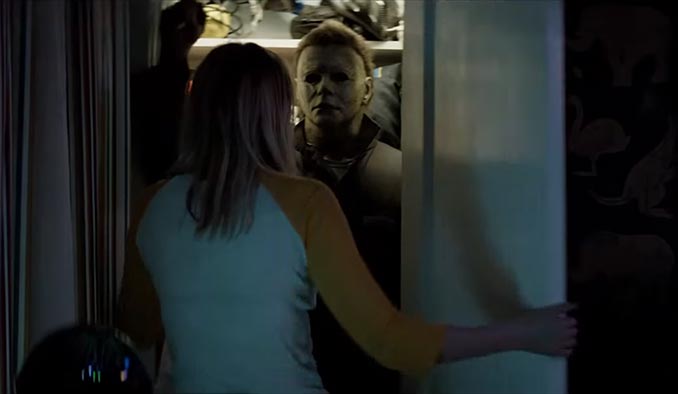 Next month will see the release of numerous horror movies, but perhaps none are more eagerly anticipated than the new Halloween movie. Today Universal Pictures released a New Halloween Trailer, a followup to the Official Trailer from June. As mentioned in the previous article, this movie is a sequel to the original Halloween movie from 1978. It picks up the story 40 years later, ignoring everything from the other Halloween movies.

Halloween will be released on October 19, 2018, which happens to be Michael Myers 61st birthday. John Carpenter is an executive producer and the film is directed by David Gordon Green. It stars Jamie Lee Curtis, Judy Greer, Nick Castle, Virginia Gardner, Andi Matichak, and Will Patton.

Jamie Lee Curtis returns to her iconic role as Laurie Strode, who comes to her final confrontation with Michael Myers, the masked figure who has haunted her since she narrowly escaped his killing spree on Halloween night four decades ago.

Master of horror John Carpenter executive produces and serves as creative consultant on this film, joining forces with cinema’s current leading producer of horror, Jason Blum (Get Out, Split, The Purge, Paranormal Activity). Inspired by Carpenter’s classic, filmmakers David Gordon Green and Danny McBride crafted a story that carves a new path from the events in the landmark 1978 film, and Green also directs.

The Halloween Michael Myers Movie Pop! Vinyl Figure will look good in your horror collection. It might even be the cutest thing on your shelf. He’s scary, yet adorable. This is Michael Myers as you’ve never seen him before. He stands 3 3/4-inches tall and […]