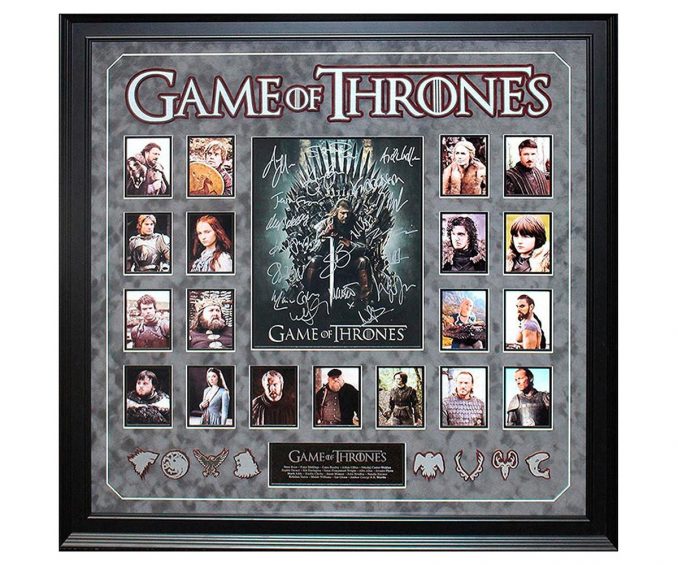 If you’re a GoT fan, you probably already saw the Game of Thrones Season 8 Teaser Trailer, and are disappointed that it will be the final season of the series. This is also the time you’re likely to be most interested in stocking up on memorabilia and collectibles, such as this Game Of Thrones Signed Collage. This magnificent piece doesn’t just have an autograph or two—it features pictures and signatures of 19 people, including George R.R. Martin and many of the cast members.

This Game Of Thrones Signed Collage is available at BoxLunch. At the time of posting it is $3,000, but there is a BoxLunch promo code, BLGIFTS, that will give you 20% off. Still expensive, but you save $600, making it $2,400.

Winter is coming! That means it’s already that time of year where you need to order a new calendar. GoT fans will want this Game of Thrones 2019 Wall Calendar, which features striking images from the popular HBO series. Check out the back of the […]

That Signed Deadpool Mask was pretty sweet, but if you like to kick it old school, you’d probably prefer this Star Wars Darth Vader Signed Helmet. It is autographed by David Prowse, the actor that physically portrayed Darth Vader in the original trilogy (James Earl […]

What can be better than a Deadpool Katana Signed by Ryan Reynolds? If you’re a Star Wars fan, then it would be this Han Solo Blaster Signed By Harrison Ford. Unfortunately, the price is high and the details are scant. Here’s what it says: They’ll […]