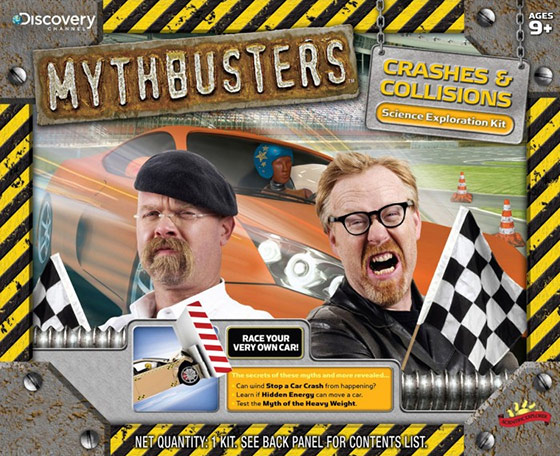 If you’ve ever watched Mythbusters, you’ve probably longed to do some of the same experiments they do on the show. Now you can with MythBusters Science Kits. These educational science kits are obviously great fun, for kids and adults, but the really cool thing is how much they teach. With five different kits, you (or your child) can learn about Crashes and Collisions, Forces of Flights, Power of Air Pressure, Science of Sports, and Weird World of Water.

Jamie and Adam, stars of the hit Discovery Channel series MythBusters, try and expose the myths and tall tales that we hear about. Discover which ones are true and which ones are not.

In our Crashes and Collisions set you find out if Wind can stop a car crash from happening. Learn if hidden energy can move a car. Test the Myth of the Heavy Weight. And Race your very own car. This kit looks to be our best MythBuster Kit yet. 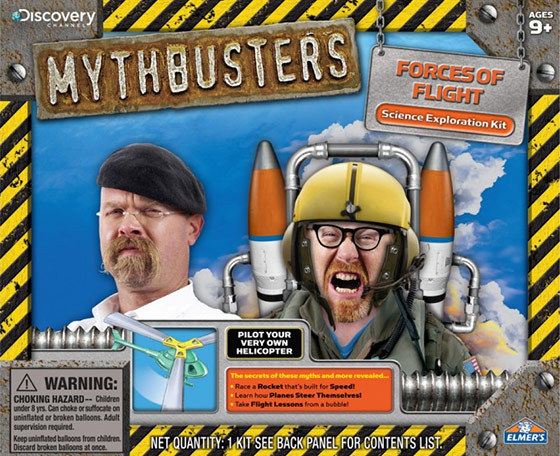 With the Mythbusters Force of Flight science kit, kids ages 9 and up can uncover the wonders of flight. People build all sorts of machines to overcome the forces that normally keep us earthbound but which ideas soar and which ones crash and burn? The Mythbusters science kit that explores the ideas behind flight can help you solve these questions and many more in a compact science kit that weighs 1.5 pounds. 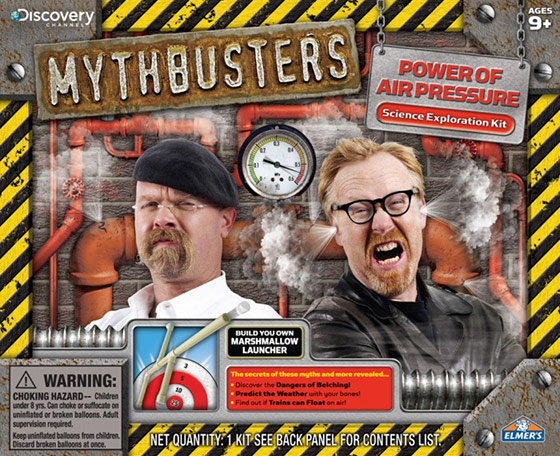 With the Mythbusters Power of Air Pressure science kit, kids ages 9 and up can uncover the wonders of one of our greatest free commodities–air. You might not notice the air around you, but it packs a powerful punch and the myth busters know how to make science fun by asking questions like, “Can air cause your stomach to explode?” and “Will air help your bones predict the weather?” The Mythbusters science kit, The Power of Air Pressure can help you solve these questions and many more in a compact science kit. 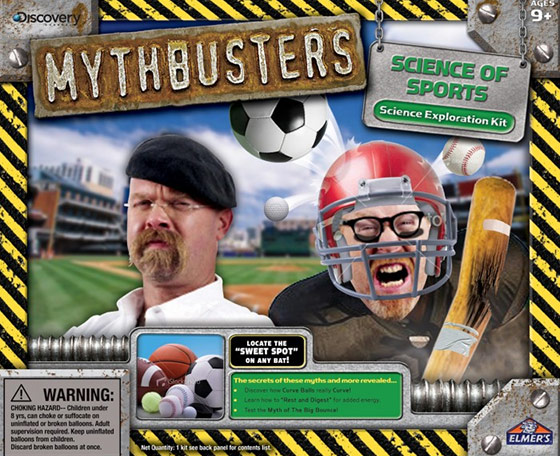 The MythBusters Science of Sports kit teaches young scientists that winning on the field or court involves more than sheer brute or skill. The kit lets youngsters discover the science behind a winning curve ball or perfect hit. With the MythBusters kit, kids gain a new appreciation for athletic and scientific prowess.

With MythBusters Science of Sports kit, there will be lots of variables to test in the myths Jamie and Adam included in this kit. They try to prove some of the crazy stories the guys have heard about sports. The MythBusters kit dispels the belief that outcome in sports comes down to which team has the most luck or which athlete has the most talent. And sure, both of those things are important. But the MythBusters science kit proves that science plays a major role in sports as well. You couldn’t score a goal or hit a home run or throw a touchdown without it. What do you think will happen when we start using our brains and not just our muscles?

With the educational toy, kids locate the sweet spot on any bat. Discover how curve balls really curve. Learn how to rest and digest for added energy. Test the myth of the “big bounce”. Jamie and Adam, the MythBusters, have included some of the best sports myths for you to test and either CONFIRM or BUST! 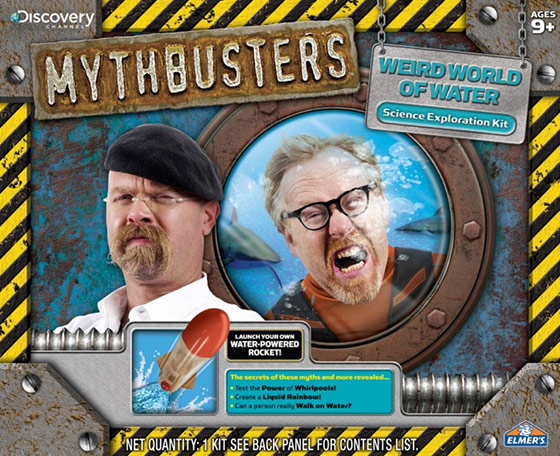 With the Mythbusters Weird World of Water science kit, kids ages 9 and up can uncover the wonders of water a very versatile element with mystical and magical properties. Water freezes and boils and turns into gas–is there anything water can’t do? The Mythbusters kids science kit about the weird world of water explores whether water can suck a ship down the drain, can water blast a rocket into space and many more in a compact science kit.

Get a potato, hook it up to the Portal 2 PotatOS Science Kit, and be prepared to be educated and entertained. The kit works similarly to the Potato Clock, where you don’t need any batteries to power it up. Instead, these kits harness the energy […]

When the carnival rolls into town, it’s not the games and rides we most look forward to; it’s the junk food! Instead of punishing yourself by dealing with crowds, parking, loud music, ridiculous ticket prices, and pushy carnies, create your own carnival feast at home […]

As they say, the future of cars is with alternative means of fuel and energy, one of these being water. The Fuel Cell Car Kit offers you a peek into this technology by letting you in on the action as well. In the kit, you […]

The Book of Totally Irresponsible Science

Imagine if a book told you that you could turn milk into stone or make a potato gun. Fancy growing a Frankenstein head as well? The experiments and discussions you’ll find in the Book of Totally Irresponsible Science will boggle your mind as well as […]

Are you looking for some epic stocking suffers this holiday season? If so, check out the Star Wars Miniature Metal DIY Model Kits. These do-it-yourself kits are available in four different versions: AT-AT, Tie Fighter, R2-D2 and Millennium Falcon. With two sheets of metal parts, […]

Teach your kids some interesting science about rocks with this Glow Rocks Science Kit. When learning is fun, kids actually learn and get smarter and stuff. This kit is recommended for kids age 6 and up. You get 4 minerals and each of them glows […]