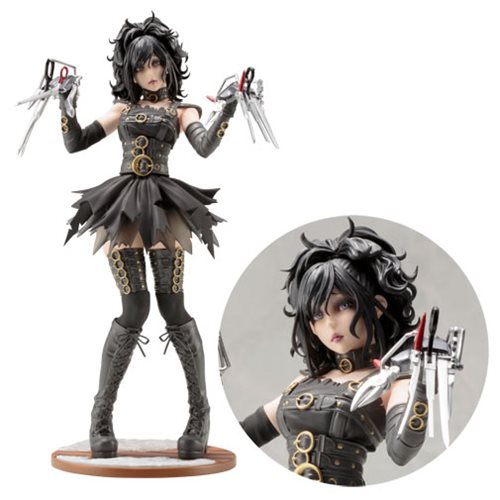 One of Tim Burton’s most iconic characters gets a new look with the Edward Scissorhands Bishoujo Statue.

Bishoujo is a Japanese term that means beautiful girl so you probably wouldn’t think about Edward Scissorhands as a candidate for the treatment that has brought new looks to characters like Harley Quinn, Batgirl, and Spider-Gwen.

However, Rule 63 states that for any given male character, there is a female version of that character, which brings us back to this highly-detailed, approximately 9-inch-tall statue that features the razor-fingered beauty in an outfit that has to be a pain to put on when your fingers are scissor blades.

The Edward Scissorhands Bishoujo Statue will be available January 2017 but it can be pre-ordered now for $89.99 at Entertainment Earth.

If you are a Tim Burton fan or just a fan of people with scissors for hands, you are going to love cuddling with this Edward Scissorhands Plush toy. He will keep you company during those cold winter nights when you watch your Tim Burton […]

How annoying is it to open a box of pizza only to discover that the slices weren’t cut properly or deep enough; thus not allowing you to grab a slice without tearing the adjacent slice to unappetizing bits? Well, the Pizza Scissor and Serve is […]

These sharp and sharp looking Edward Scissors ($11) pair of scissors come with their own clever stand – serving as a nice decoration and making it easy to find your cutting tool when needed. Made out stainless steel and manufactured in Germany.