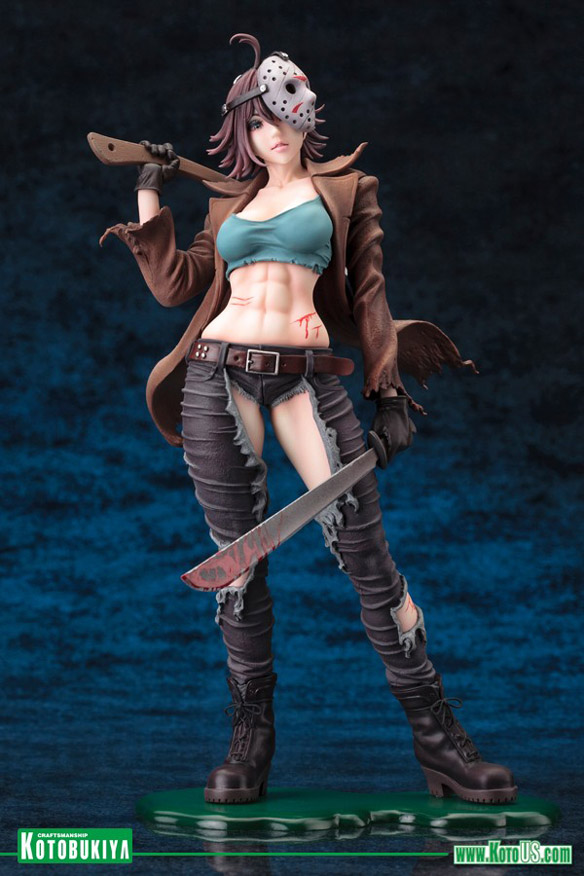 To run or not to run? That’s the question you’ll ask when the killer looks like the Jason Voorhees Bishoujo Statue, although the bloody machete indicates that running is probably still the right choice.

Following in the bloody footsteps of the Freddy Krueger Bishoujo Statue, everyone’s favorite summer camp killer gets the Bishoujo treatment, adding a little sexiness while still maintaining an air of menace.

Standing 8 3/4-inches tall, this character interpretation by Japanese illustrator Shunya Yamashita features a female version of Jason carrying an ax in one hand and a machete in the other, with torn clothing showing off her athletic physique… because you have to stay in shape when you spend your summers chasing teens through the woods

The Jason Voorhees Bishoujo Statue will be available January 2015 but it can be pre-ordered now for $69.99 at Entertainment Earth. Also at Amazon.com for $74.99.

Looking for an action figure that will slash your other figures to pieces? Look no further than this Friday the 13th Jason Voorhees ReAction 3 3/4-Inch Retro Action Figure. At last you can get a Jason Voorhees Action Figure, in retro Kenner style. He measures […]