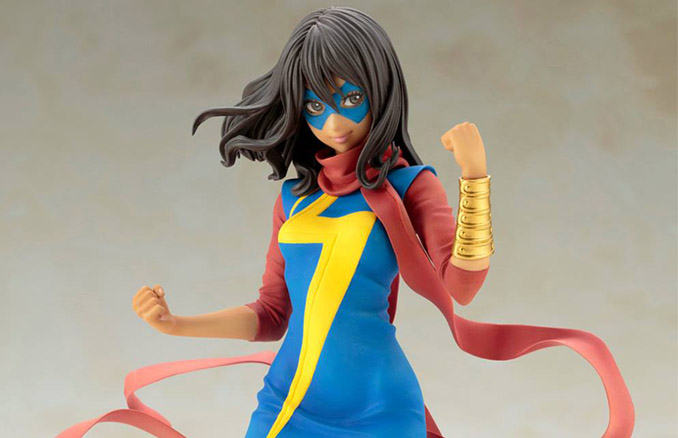 Bishoujo means beautiful girl and Kotobukiya totally owns the genre with their line of Bishoujo statues that include Squirrel Girl, a female Freddy Kruger, Spider-Gwen, She-Hulk, and Mystique.

Fans of past Bishoujo figures might be a little disappointed because the usual sexiness of the line has been toned down since Kamala Khan is only 16-years-old, but that doesn’t mean the 7 1/2-inch-tall is any less awesome. The new Ms. Marvel stands with fists clenched and ready to fight, wearing her iconic red and blue outfit, her super-long scarf trailing behind her.

The Captain is out and the Ms. is in with the Ms. Marvel Kamala Silhouette Womens T-Shirt. When Carol Danvers upped her game and became Captain Marvel, her old moniker just sat around and collected dust, but only for a little while because Kamala Khan […]