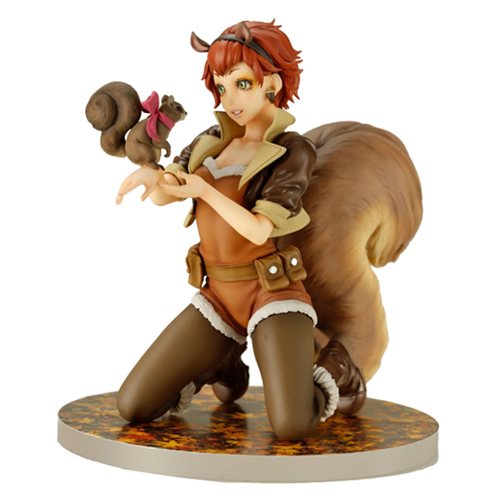 It’s time to go nuts with the Marvel Squirrel Girl Bishoujo Statue, featuring the character who might possibly be the most powerful Marvel Comics hero ever.

Her number one ability is the power to talk to squirrels, but Doreen Green AKA Squirrel Girl has faced Kraven the Hunter, teamed-up with Iron Man, and become BFFs with Galactus. She’s even tough enough to go toe-to-toe with Wolverine.

Beautifully rendered by master illustrator Shunya Yamashita, this approximately 5 1/3-inch-tall statue features a bushy-tailed Squirrel Girl kneeling on a base of leaves with her squirrel sidekick, Tippy-Toe. She’s even wearing her nut sack utility belt.

The Marvel Squirrel Girl Bishoujo Statue will be available July 2017 but it can be pre-ordered now for $74.99 at Entertainment Earth.

Forget the guys with hi-tech armor and super-soldier serum flowing through their veins because the Squirrel Girl Nuttin But Trouble T-Shirt is all about a Marvel character that most people probably don’t even know about. Bitten by a radioactive squirrel and gaining the proportionate abilities […]

Everybody loves a little squirrel humor, whether it comes from something small like the Squirrel Coffee Cup, or something large like the Squirrel Mask. These ceramic Squirrel Salt and Pepper Shakers will put a smile on your face every time you need a dash of […]

The Squirrel Pen is for fans of squirrels who love to write rather than type or use a touchscreen. It’s an elegant pen that looks just like our long tailed rodent friends. Put a Squirrel on your desk today with this cute pen and always […]