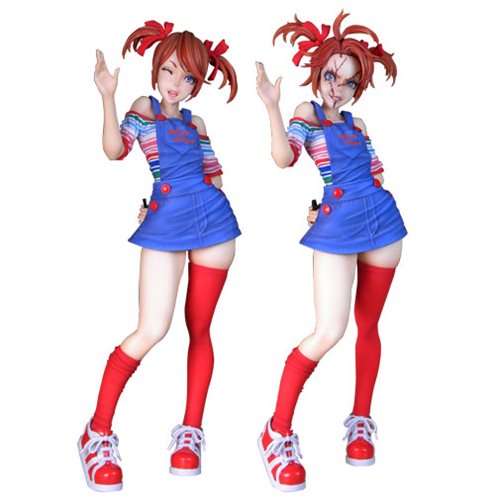 Horror never looked as cute as it does with the Child’s Play Chucky Bishoujo Statue, adding a whole new dimension to Chucky asking if you wanna play.

Inspired by master illustrator Shunya Yamashita and everyone’s favorite killer doll from Child’s Play, this approximately 8-inch-tall statue features a Bishoujo-style Chucky looking cute, mischievous, and oh-so deadly, especially when you notice the knife behind her back. An alternate head is included to capture Chucky’s damaged look.

Chucky is the latest iconic character to enter the Bishoujo horror collection that also includes the Freddy Krueger Bishoujo Statue and the Jason Voorhees Bishoujo Statue.

The Child’s Play Chucky Bishoujo Statue will be available June 2017 but it can be pre-ordered now for $74.99 at Entertainment Earth.

Crazy-cute? Or just crazy and cute? Either way, the DC Comics Harley Quinn Bishoujo Statue provides a cute look at one of the most colorful characters in Gotham City… and that’s saying a lot when you’re talking about a town filled with clowns, penguins, and […]