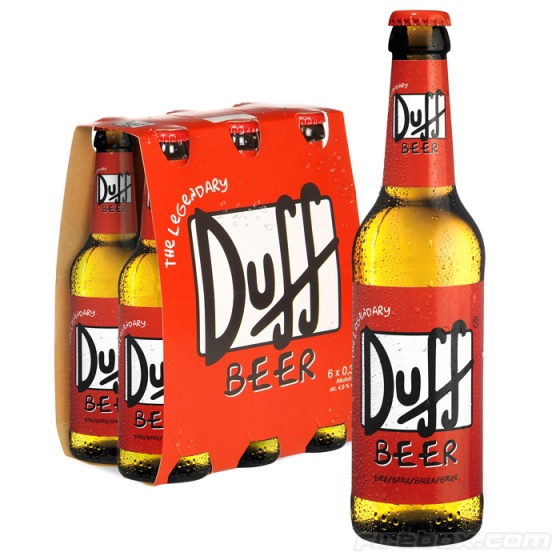 Do you want regular beer or do you want to enjoy the same quality lager Homer Simpson does with this bottled Duff Beer Six-Pack. It’s not just some Duff Energy Drink that’s been packaged in Duff cans either. Folks, this is the real thing. D’oh!

Fans of the hit show will love holding a bottle of beer that main character Homer Simpson is always chugging down. Sit down with some of your closest friends and have good times over this six-pack of beer. And when you’re done, just pop some Duff Beer Can Mints to keep your breath smelling fresh afterwards.

But not just any old beer, because like most Springfield residents Homer is strictly a Duff kinda guy – and now you can be one too with the Duff Beer Six Pack. Woo-hoo!

Okay so it’s not brewed in Springfield (believe it or not it’s German) but that’s just as well because we all know German lager trumps American beer every time. Coming in at 4.7%this mild(ish) lager is really rather refreshing and the packaging is just the same as the iconic cardboard carry-outs you see in Apu’s Kwik-E-Mart.

The Death Star has been the inspiration for many cool designs, with my favorite being the Death Star Cookie Jar. Now you can get some very cool exclusive new super cards for a Star Wars card game and a cool Death Star inspired case to […]