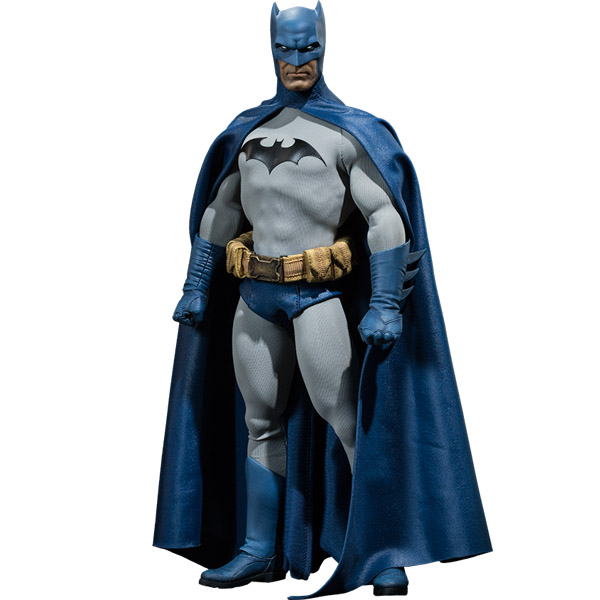 Just when I think I’ve seen the ultimate Batman collectible, something even more awesome comes out. The Batman Sixth-Scale Figure blows the Bat-doors off all other Bat figures because this one can be customized.

The Dark Knight has been around for over half a century and his look has changed through the years. One of the more notable changes is how artists interpret Batman’s cowl. He’s had short, stubby, barely-there ears, super-long ears that could poke somebody’s eye out, and varying lengths between those two extremes. One of the interesting things about this 12-inch-tall figure is that you can choose between long and short ears, instead of settling for a look you don’t like.

In addition to changeable ears, Batman also comes with a hand-tailored blue and grey fabric Batsuit and cape, a variety of Bat-gadgets that includes a Krypronite ring, and two facial expressions, along with the Sideshow Exclusive Brawl Damage Portrait.

The Batman Sixth-Scale Figure will be available August 2014 but can be pre-ordered now for $199.99 (or for as little as $40.00/month) at Sideshow Collectibles.

Bruce Wayne will never win any awards for being the happiest guy in Gotham City but he’s looking more fierce than usual with the Batman Gotham Knight Sixth-Scale Figure. In addition to goodies like a batarang, a grappling hook, a grapnel dart gun, and three […]

Forget DC Comics’ New 52 because the Superman Sixth Scale Figure is all about the Man of Steel’s classic look. Sure, the red undies are once again on the outside but the New 52 redesign took things a little too far by giving Kal-El armor. […]