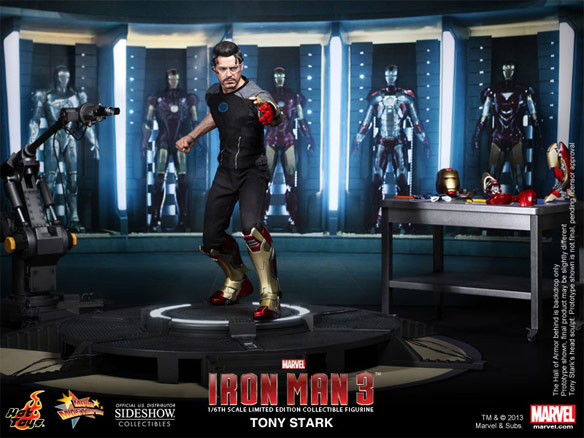 Tony Stark might be all kinds of tough when he’s tucked inside his armor but he’s just a regular guy when outside his hi-tech jammies, which is why he needs to be able to get armored up as fast as possible. The Tony Stark Movie Masterpiece Series Sixth Scale Figure captures a scene straight out of Iron Man 3, where Tony is experimenting with new armor that flies across the room and onto his body with just a thought.

In the first film of the Iron Man franchise, Tony Stark announced to the world that he is Iron Man. Well, ever since that movie came out, Robert Downey Jr. is Tony Stark. Go ahead and try to picture someone else in the role. Bet you can’t do it. Hot Toys kept that thought in mind, which is why this new figure features a detailed likeness of RDJ.

In addition to looking like the actor, the figure also has a battery-operated LED light on the chest, over 30 points of articulation, and numerous interchangeable body parts and sections of armor that allow you to create a variety of poses. An articulated mechanical robot with wheels and camera, along with a desk with wheels, armor sections, magazine, blueprints, electrical wires and tools are also included with the figure.