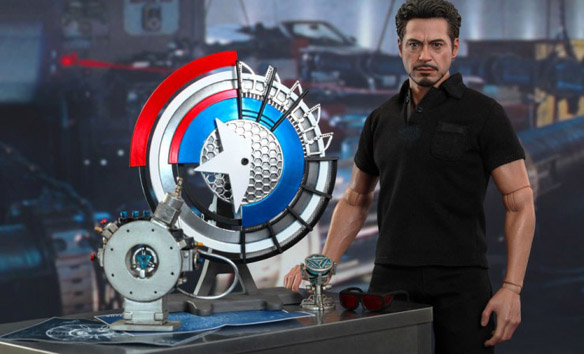 The man behind the armor is busy creating something new in the Tony Stark with Arc Reactor Collectible Set, and he doesn’t mind using Captain America’s shield to get the job done.

When do you use the iconic symbol of the First Avenger as a mere tool to level your experiment? When you’re Iron Man, of course, and that’s exactly what Stark did in Iron Man 2. You can now recreate the scene where Tony discovers a new source of power for his life-preserving arc reactor.

The collectible set contains a ton of goodies, including a 12-inch-tall figure of Tony Stark that looks so real you’ll think Robert Downey, Jr. stopped by for a visit.

The Tony Stark with Arc Reactor Collectible Set will be available January 2015 but it can be pre-ordered now for $199.99 at Sideshow Collectibles.

If you can’t afford a whole suit of armor because you don’t have Tony Stark’s bank account, you can still wear the red and gold with the Marvel Iron Man 3 LED Arc Reactor Ring. It won’t let you fly or blast irritating people with […]

This Iron Man Arc Reactor Lab is essentially a science kit for kids. You get 24 different combinations of chips and it even has a nightlight mode with display stand. Here you have everything you need to build your own Arc Reactor. With 24 different […]

Well, if you want to be light Tony Stark you have to have an arc reactor in your chest. This Tony Stark Light up LED Iron Man Shirt will put one on your chest. While it may not save your life and prevent shrapnel from […]

Tony Stark’s armored alter-ego is large and in charge on the Arc Reactor Rainmaker Tank Top, creating an attention-getting top that will hit people like a repulsor blast between the eyes. In addition to Iron Man soaring into action with his shiny red and gold […]

Although it is sleek and beautiful, the design of the Microsoft Arc Touch Mouse is actually very practical. It is flexible, so you can curve the MS Arc Touch Mouse for the perfect fit for you. When it comes time to travel, just flatten it […]

Since women like men who ride motorcycles, a repeated gag on movies and TV is for a guy to carry a motorcycle helmet with him to a bar or nightclub, even though he doesn’t ride a motorcycle. I’m not sure if this trick works in […]

Iron Man has his helmet off and he’s ready for his close-up with the Tony Stark (Mark XLIII Armor Version) Artist Mix Collectible Figure. You can almost picture the little guy announcing ‘I am Iron Man’ to the world, but of course that announcement was […]