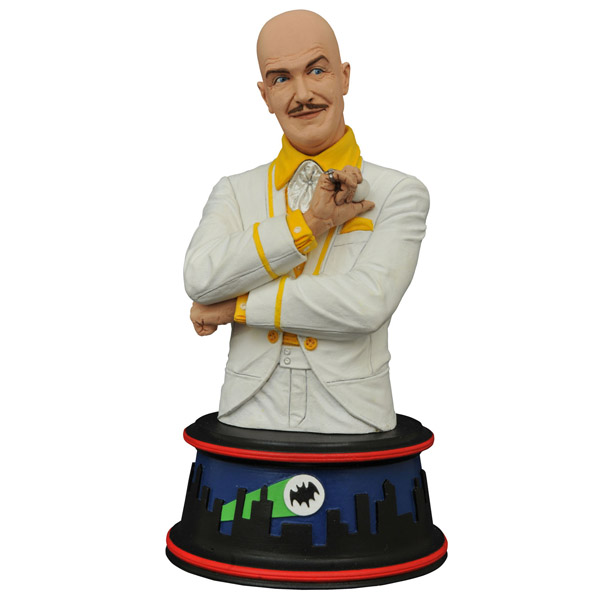 The nefarious Edger Heed took a few moments from his eggtremely busy schedule to pose for the Batman Classic 1966 TV Series Egghead Mini-Bust. Afterwards, he used tear-gas eggs to escape the studio before Batman and Robin could apprehend him.

Based on Vincent Price’s eggscelent portrayal of the egg-loving villain in the classic 1966 Batman television series, and limited to just 3000 pieces, the 6-inch tall bust features Egghead wearing his iconic yellow and white suit on top of a base inspired by the show’s animated opening scene.

The Batman Classic 1966 TV Series Egghead Mini-Bust will be available February 2016 but it can be pre-ordered now for $49.99 at Entertainment Earth.

You have to break a few eggs to make an omelette but don’t do it around the eggcellent Batman Egghead Maquette because the classic villain definitely won’t be sunny-side up about it. Standing 14-inches tall and dressed in his iconic egg-white suit and yolk-yellow shirt, […]

One of Batman’s oldest and most deadly foes is the Penguin. He definitely belongs in your Rogues gallery and this Batman 1966 TV Series Penguin Burgess Meredith Mini-Bust is the perfect way to add him. This 6-inch tall resin bust captures the likeness of Burgess […]