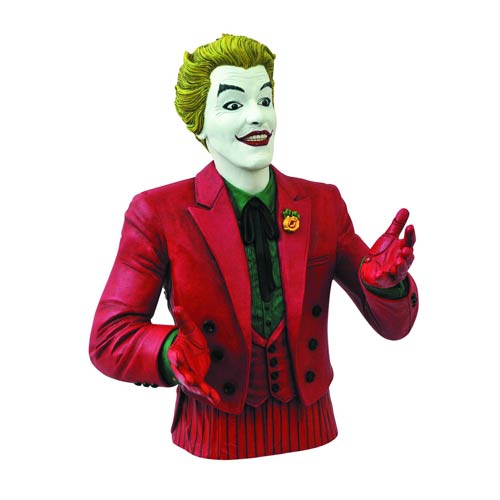 The 1966 version of the Joker certainly had style with his bright suit and winning smile, but did you know that he was also a saver? The guy saved money like crazy. Now you can too with this Batman 1966 TV Series The Joker Bust Bank.

Let the clown prince of crime help you save your money with this cool bank. This 8-inch vinyl bank of The Joker is the perfect way to save money for more cool toys. It is based on the likeness of Cesar Romero as he appeared in the 1966 Batman Classic TV Series.

Only $19.99 from Entertainment Earth. Pre-order it today for an April release.

It won’t let you get in touch with the Caped Crusader or Commissioner Gordon but the Batman Classic 1966 TV Series Batphone Vinyl Bank will help connect you with more money. The best way to save money is to not spend money and holding on […]

Adam West’s Batman from 1966 is alive and well. And helping you to save money. This Batman 1966 TV Series Bust Bank captures the 1966 Batman perfectly. The colors are nice and vivid and Batman is holding his batarang at the ready. The Joker won’t […]

This Batman Classic 1966 TV Series Shakespeare Head Bust Bank is what you need to access those Bat-poles! Okay, maybe you don’t have a Batcave yet. That’sokay. You can use this as a bank. Keep your spare change safe in it while you save up […]