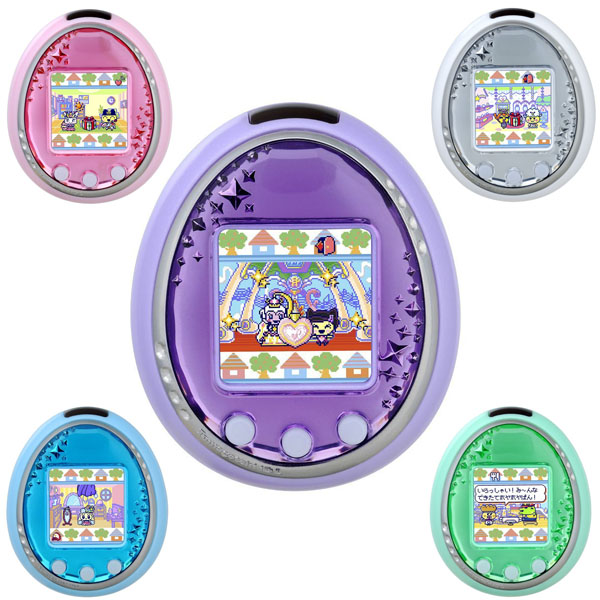 It’s always fun to get preliminary exposure to the fun electronics that come out of Asia, so we’re giving you a glimpse at the Bandai Tamagotchi iD L Digital Pet from Japan.

Keeping up with the times, these egg-shaped gizmos have some decorative sparkles on them and come in six different colors. Get to know and love all 32 characters that live within each egg, and control a virtual society in the palm of your hands. The iD L is also packed with games and cartoon-like scenery to keep you entertained for hours. The images on the tiny screen are sharp and colorful, making characters easy to see and interact with, and there are only three buttons to get things moving. So whether you can read Japanese or not, my guess is that it wouldn’t take long before figuring out what each button does.

The Tamagotchi iD L is the latest model in Bandai’s series, exclusive to Japan. The world’s most famous handheld digital pet just got even better, with this release available in SIX cute colors and featuring THIRTY-TWO virtual Tamatomo characters.

The iD L came out last year but since it’s mainly meant to be sold in Japan, it’s all pretty new to us Westerners. Tamagotchi Pets were really popular worldwide at one point, so who knows what’ll become of this suped-up iD L version. It’s a nice alternative to give to kids if you don’t want them tampering with your smart phone or tablets all the time.

You can find the Bandai Tamagotchi iD L Digital Pet in blue, pink, purple, white, green and yellow at the Japan Trend Shop or on Amazon. Prices tend to range roughly from somewhere between $50-$100.

Another digital toy from the same company is the Bandai SmartPet Robot Dog, which turns your iPhone into an electronic dog.

If owning a real pooch is completely out of the question, the Bandai SmartPet Robot Dog for iPod and iPhone might not be the worst substitute. You may not have to settle for goldfish, lizards or guinea pigs after all. Virtual pets have been around for […]

This new and impressive diorama speaker from the Japanese toy manufacturer Bandai has been designed to look like the Ginza district in Tokyo, Japan did back in 1955.

This pet bed is fit for evil geniuses bent on world domination. Who else would own Japanese Nanotechnology Pet Beds that make it look as though your dog is getting eaten by a shark? Well, I would too and I’m no evil genius. These pet […]

This mini digital camera, rechargeable via USB, easily attaches to your pet’s collar and will then allow you to see what your furry little friend is up to when you’re not around.

Japan has experienced its fair share of natural disasters, so it’s no surprise that the Japanese have created such gear as the Pet Emergency Evacuation Jacket. But we’re all subjected to emergency situations when we have to get the hell out of dodge, and many […]

The Roboco robot pet from Tomy is now available at AudioCubes for $17. (Update: Link removed because the page is gone.) This little square robot dog (or cat, whichever you prefer) is the new Tamagotchi. Roboco acts just like your pet. It eats, sleeps, needs […]

The Bandai Cook Joy Pack Sand Maker is a really cool machine for making unique cookies and sandwiches. Instead of making a plain sandwich, you can make really cute fun sandwiches that kids of all ages will like. There are a range of shapes, including […]

A happy childhood isn’t complete without having played with a Lite Brite set. But for those who’ve never had a Lite Brite or can’t get enough of it, there’s a new improved Lite Brite on the market. Ahh, good things come to those who wait. Introducing the mother of all […]

This Suicide Squad Deadshot Bandai SH Figuarts Action Figure never misses, just like Deadshot himself. It was created using top of the line digital print technology, to give you a dead ringer of Will Smith as Deadshot. It has a bunch of minute details, right […]