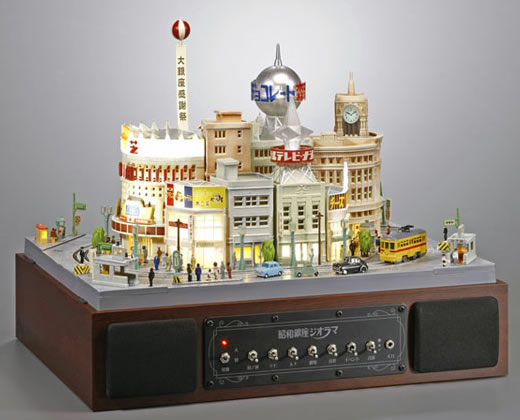 This new and impressive diorama speaker from the Japanese toy manufacturer Bandai has been designed to look like the Ginza district in Tokyo, Japan did back in 1955.

Here’s a translated version of the press release for the Bandai Diorama Speaker.

3-in-1 Skype Webcam, Speaker and Microphone

They call it a 3-in-1 Skype Speaker, but this combination webcam, microphone and speaker can be used by all kinds of video conferencing and web chat applications. Instead of cluttering your desk with separate speakers, webcams and microphones, this handy USB gadget allows you you […]

It’s always fun to get preliminary exposure to the fun electronics that come out of Asia, so we’re giving you a glimpse at the Bandai Tamagotchi iD L Digital Pet from Japan. Keeping up with the times, these egg-shaped gizmos have some decorative sparkles on them […]

One thing I enjoy doing is riding my bike to the outskirts of town with some serene and peaceful music just playing on my iPod. I find that the iMusic Speaker Hat is great for listening to some beats while you’re on the go. But […]

This beautiful little speaker from Motz, made of apricot wood and 100% handcrafted, can be hooked up to any audio source using a standard 3.5mm stereo audio plug.

We’ve seen quite a few mouse combos lately – calculators, remote controls etc. – but this gamepad model from Evergreen might be the coolest one so far.

If owning a real pooch is completely out of the question, the Bandai SmartPet Robot Dog for iPod and iPhone might not be the worst substitute. You may not have to settle for goldfish, lizards or guinea pigs after all. Virtual pets have been around for […]