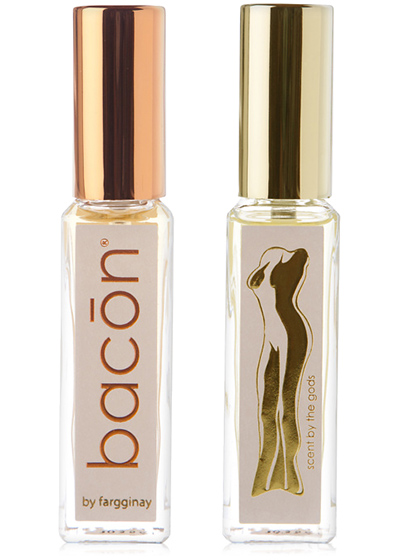 I like eating bacon just as much as anyone, but all these bacon products lately are getting a bit ridiculous. Take for example this new Bacon Unisex Perfume. I like to eat bacon, but I don’t want to smell like it (or be with someone that smells like bacon.) Fortunately, it may not be as bad as it sounds, as this is apparently a sophisticated fragrance, and the bacon scent is subtly infused with other aromas. Faint hints of bacon combine with other scents may actually smell very good as a cologne.

There are two versions of this fragrance, both of them being suitable for men or women. Bacon Classic has a spicy maple aroma with an intricate combination of bergamot, lime, orange, grapefruit, black pepper, vetiver, guaiac wood, and cedar wood. Plus, of course, a hint of smoky bacon.

The Bacon Gold perfume is more of a sizzling citrus aroma with a subtle hint of savory bacon. It also has a blend of mandarin, bergamot, lemon, grapefruit, nutmeg, black pepper, and pimento berry scents.

I think I’m starting to like the sound of these fragrances…and definitely getting hungry!

Pre-order Bacon Unisex Perfume in Gold or Classic versions for £31.99 at Firebox.com.