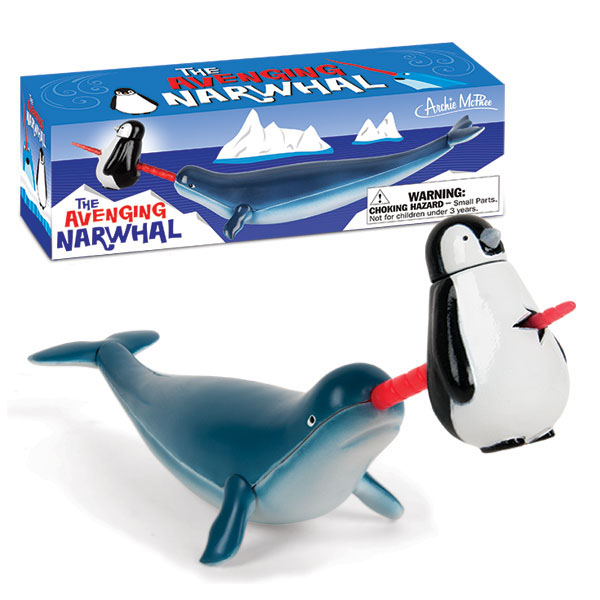 Forget about Great White Sharks, killer squids, and all those other lame ocean animals that seek death and destruction for all land-dwellers because the Avenging Narwhal has arrived on the scene. The narwhal, which also happens to occasionally be called a narwhale, is actually a whale with a major overbite issue. While it looks like a unicorn got freaky with a whale, the narwhal’s horn is actually a tooth.

Why is this narwhal seeking vengeance? The story goes something like this –

The Avenging Narwhal, with his whale body and unicorn horn, has long struggled with his looks. In school, he was constantly teased by a clique of adorable penguins. This went on for years, but the Avenging Narwhal did nothing. Then, senior year during study hall, he intercepted a note intended for a penguin, and his life changed forever. He uncovered the penguin conspiracy to take over the world. Penguins employed a propaganda campaign of nature documentaries and animated films to lull the world into thinking that they were harmless. In reality, each penguin was a megalomaniacal genius intent on full control of humans.

The Avenging Narwhal has since made it his duty to crush the penguins’ evil plot by piercing them in their cute bellies with his magical tusk, thereby reducing the number of waddling, formalwear-clad threats to humanity. So, while your friends and neighbors talk about how cute penguins are and how they look like they’re wearing tiny tuxedos, you’ll know that the true friend of the world is the homely, but heroic, Avenging Narwhal, who has devoted his life to ending the penguin scourge.

If you’ve seen any of the Madagascar films, then you know penguins are far from being cute and innocent. They’re devious creatures that think they have the right to do as they wish simply because nature put them in tuxedos.

You can help the Narwhal on his quest by commemorating his self-appointed mission with the Avenging Narwhal for $7.50 at McPhee.com.

UPDATE November 2012: You can purchase the Avenging Narwhal at the NeatoShop for $7.45.

If the Pickle Fingers tickled you silly, then the Narwhal Finger Puppets will surely be good for a poke or two. These 3-3/4″ soft rubber finger puppets have a contagious smile and a pointy horn, which makes for a handy food pick or a sharp […]

We’ve found some narwhal-related merchandise before such as Narwhal Finger Puppets and Narwhal Horn Mints, and several unicorn things like Unicorn Chopsticks and Corn Cob Holders. But never before in GeekAlerts history have the two single-horned creatures been combined into one. What was thought to be impossible has been pulled off in […]

The Whale Non-Skid Mat from Kikkerland is the perfect way to make sure that you don’t seriously injure yourself while climbing into that steaming tub of warm bath water.  This mat would be a perfect gift for any whale lover or senior citizen who needs […]

If you watch Glee, then you know about this ditzy character named Britney S. Pierce who’s the perfect epitome of the dumb blonde. She believes that leprechauns exist and is generally clueless when it comes to, well, everything. And one thing that she fancies (that […]