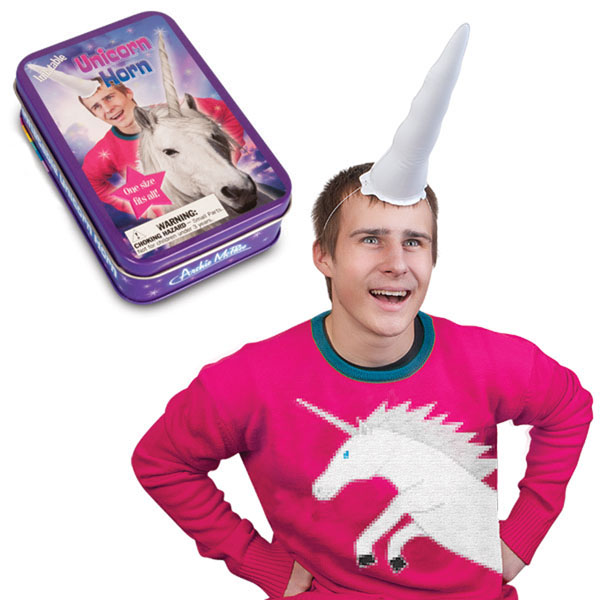 If you watch Glee, then you know about this ditzy character named Britney S. Pierce who’s the perfect epitome of the dumb blonde. She believes that leprechauns exist and is generally clueless when it comes to, well, everything. And one thing that she fancies (that also doesn’t happen to exist) is unicorns.

If you know anyone who’s anything like her at all, then you’ll probably have a ton of fun with this Inflatable Unicorn Horn. Convince her and all others like her that you’re a magical creature and that you’re special just because you’ve got a white horn on your forehead–all in good fun, of course.

Aside from that, you could also use it for costume parties and events where you have to dress according to a certain theme.

The Inflatable Unicorn Horn will be arriving sometime within March 2012 at Entertainment Earth and will be available for $7.99 and is available now at Amazon.com from $7.99.

Unicorns may not exist in real life, but that doesn’t mean you can’t have one on your desk. A small one, with no legs and torso. This Unicorn Pencil Sharpener becomes magical the moment you insert a pencil to be sharpened. That’s not just any […]

Where did all the Unicorns go?  The mythical creature we always here about but never see.  I’ll tell you where they went; in a can!  The Canned Unicorn Meat solves that age old question whether they do or do not exist.  This spoof gift is […]

Looks like that Jabba the Hutt Costume may have some competition this Halloween season. This Star Wars Tauntaun Inflatable Adult’s Costume is perfect for Halloween. And I thought they smelled bad on the outside! Just kidding. No bad smells here. This is your chance to […]